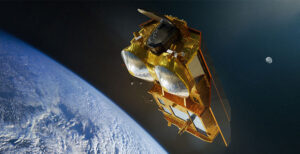 The Copernicus Polar Ice and Snow Topography Altimeter mission, or CRISTAL, is one of two Earth-observing missions Airbus was awarded this summer as Europe expands the network of Sentinel satellites it began launching in 2014 to keep closer tabs on the environment.

Thales Alenia Space, which was chosen as prime contractor for three of the six new-generation Copernicus missions awarded in July, will build CRISTAL’s main instrument under an 88-million-euro subcontract to Airbus signed this week.

With a planned launch in 2027, the European Union intends to use CRISTAL to monitor the cryosphere, which includes all areas of the Earth’s surface where water is found in solid form. Specifically, the satellite will gauge the thickness of sea ice and the snow that covers it, both of which are key indicators to predicting climate change.

“It will be critical in monitoring climate indicators, including the variability of Arctic sea ice, and ice sheet and ice cap melting,” said Josef Aschbacher, the European Space Agency’s director of Earth observation programs. ESA will oversee the development, launch and operation of the mission on behalf of the European Commission-led Copernicus program.

Airbus said the 1.7-ton CRISTAL satellite it has been tasked to develop will feature six fixed and two deployable solar arrays, and onboard storage for up to 4 terabits of science data the satellite will collect over its planned 7.5-year lifetime.

Airbus said the spacecraft will build on a satellite design it used for the Sentinel-6 ocean topography satellite launching in November and CryoSat-2, a CRISTAL forerunner mission that launched in 2010 and remains in service.

Thales Alenia Space will be responsible for developing CRISTSAL’s primary payload, the Interferometric Radar Altimeter for Ice and Snow (IRIS) instrument. The Franco-Italian spacecraft manufacturer signed an 88-million-euro contract with Airbus on Sept. 21 to develop two flight-ready IRIS instruments for the mission.

The IRIS instruments are dual-frequency Ku-/Ka-band radar altimeters that will be used to measure the thickness of sea ice and the snow that covers it. The instruments will also measure and monitor the height of the world’s ice sheets and glaciers. Thales Alenia Space said the instruments’ dual-frequency operation will help it make more accurate measurements than earlier ice-monitoring altimeters.

Once CRISTAL is complete, it is expected to be launched into a polar orbit approximately 760 kilometers above the Earth.

According to Copernicus program manager Guido Levrini, the spacecraft will be designed to be compatible with two different launch vehicles, one of which is the Arianespace Vega-C — a light-lift launch vehicle now expected to debut in mid-2021. Levrini did not indicate what other rocket was being considered for the mission.

The CRISTAL prime contract is the second Copernicus deal that ESA has formalized since announcing its contractor selections for all six missions July 1. The first was a 445-million-euro contract that ESA signed with Germany’s OHB Space Systems July 31 to build a pair of satellites for the Copernicus Carbon Dioxide Monitoring mission. Instruments for that mission will be built by Thales Alenia Space.

The European Commission inaugurated its Copernicus environmental monitoring system in 2014 with the launch of the Sentinel 1-A radar satellite. Six more Sentinel satellites have followed, with seven now in orbit, the most recent of which — the Sentinel-3B oceanography satellite — was launched in 2018. The next Copernicus satellite, Sentinel-6 Michael Freilich, is slated to launch Nov. 10 from Vandenberg Air Force Base, California, aboard a SpaceX Falcon 9.