Astronomers present an explanation for the mesmerising shapes of planetary nebulae. The discovery is based on an extraordinary set of observations of stellar winds around ageing stars. Contrary to common consensus, the team found that stellar winds are not spherical but have a shape similar to that of planetary nebulae. The team concludes that interaction with an accompanying star or exoplanet s

Dying stars swell and cool to eventually become red giants. They produce stellar winds, flows of particles that the star expels, which causes them to lose mass. Because detailed observations were lacking, astronomers have always assumed that these winds were spherical, like the stars they surround. As the star evolves further, it heats up again and the stellar radiation causes the expanding ejected layers of stellar material to glow, forming a planetary nebula.

For centuries, astronomers were in the dark about the extraordinary variety of colourful shapes of planetary nebulae that had been observed. The nebulae all seem to have a certain symmetry but are almost never round.

"The Sun - which will ultimately become a red giant - is as round as a billiard ball, so we wondered: how can such a star produce all these different shapes?" says corresponding author Leen Decin (KU Leuven).

Her team observed stellar winds around cool red giant stars with the ALMA Observatory in Chile, the largest radio telescope in the world. For the first time ever, they gathered a large, detailed collection of observations, each of them made using the exact same method. This was crucial to be able to directly compare the data and exclude biases.

What the astronomers saw, surprised them. "We noticed these winds are anything but symmetrical or round," Professor Decin says. "Some of them are actually quite similar in shape to planetary nebulae."

Companions
The astronomers could even identify different categories of shapes. "Some stellar winds were disk-shaped, others contained spirals, and in a third group, we identified cones."

This is a clear indication that the shapes weren't created randomly. The team realised that other, low-mass stars or even heavy planets in the vicinity of the dying star were causing the different patterns. These companions are too small and dim to detect directly.

"Just like how a spoon that you stir in a cup of coffee with some milk can create a spiral pattern, the companion sucks material towards it as it revolves around the star and shapes the stellar wind," Decin explains.

Up until now, calculations about the evolution of stars were based on the assumption that ageing Sun-like stars have stellar winds that are spherical.

"Our findings change a lot. Since the complexity of stellar winds was not accounted for in the past, any previous mass-loss rate estimate of old stars could be wrong by up to a factor of 10." The team is now doing further research to see how this might impact calculations of other crucial characteristics of stellar and galactic evolution.

The future of the Sun
The study also helps to envision what the Sun might look like when it dies in 7000 million years. "Jupiter or even Saturn - because they have such a big mass - are going to influence whether the Sun spends its last millennia at the heart of a spiral, a butterfly, or any of the other entrancing shapes we see in planetary nebulae today," Decin notes. "Our calculations now indicate that a weak spiral will form in the stellar wind of the old dying Sun."

"We were very excited when we explored the first images," says co-author Miguel Montarges (KU Leuven). "Each star, which was only a number before, became an individual by itself. Now, to us, they have their own identity. This is the magic of having high-precision observations: stars are no longer just points anymore."

The study is part of the ATOMIUM project, which aims to learn more about the physics and chemistry of old stars. "Cool ageing stars are considered to be boring, old and simple, but we now prove that they are not: they tell the story of what comes after. It took us some time to realise that stellar winds can have the shape of rose petals (see, for example, the stellar wind of R Aquilae), but, as Antoine de Saint-Exupery said in his book Le Petit Prince: 'C'est le temps que tu as perdu pour ta rose, qui fait ta rose si importante' - 'It's the time you spent on your rose that makes your rose so important'," Decin concludes.


Related Links
KU Leuven
Stellar Chemistry, The Universe And All Within It 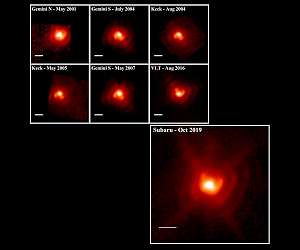 Unraveling a spiral stream of dusty embers from a massive binary stellar forge
Tokyo, Japan (SPX) Sep 17, 2020
With almost two decades of mid-infrared (IR) imaging from the largest observatories around the world including the Subaru Telescope, a team of astronomers was able to capture the spiral motion of newly formed dust streaming from the massive and evolved binary star system Wolf-Rayet (WR) 112. Massive binary star systems, as well as supernova explosions, are regarded as sources of dust in the Universe from its early history, but the process of dust production and the amount of the ejected dust are still o ... read more