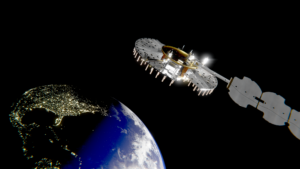 WASHINGTON — An experimental navigation satellite developed by the Air Force Research Laboratory will fly to orbit in 2022 on USSF-106, a mission recently awarded to United Launch Alliance under the national security space launch program.

“We are booked on a ULA Vulcan rocket,” said Arlen Biersgreen, the program manager of the Navigation Technology Satellite-3 (NTS-3) at the Air Force Research Laboratory’s Space Vehicles Directorate.

“It’s a big milestone for us,” Biersgreen told SpaceNews Sept. 15.

USSF-106 is a classified mission. NTS-3 will be the aft payload. Vulcan is a new launch vehicle scheduled to start flying in 2021 and will launch at least two commercial payloads before it’s cleared to launch military satellites in 2022.

“We are starting to plan the launch with ULA,” Biersgreen said.

The 1,250-kilogram satellite is being built by L3Harris under an $84 million contract AFRL awarded the company in December 2018.

NTS-3 is one of the AFRL’s most ambitious space projects that could shape the future of military PNT. The satellite will be deployed to a geosynchronous orbit to supplement the military’s GPS constellation that operates from medium Earth orbit.

The experiment will demonstrate next-generation technologies such as phased array antennas, flexible and secure signals and reprogrammable systems, Biersgreen said.

Joe Rolli, head of business development for L3Harris’ Positioning, Navigation and Timing division, said the satellite is about to enter production following a successful design review in July.

AFRL named the satellite Navigation Technology Satellite-3 for historical reasons. The Naval Research Laboratory’s NTS-1 and NTS-2 flew in the 1970s and those programs eventually matured into the current GPS.