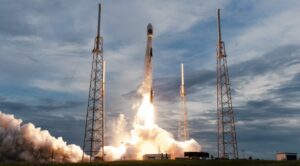 WASHINGTON — Despite the successful demonstration of a launch to polar orbit from Cape Canaveral, the U.S. Space Force doesn’t foresee shifting launches to those orbits there from Vandenberg Air Force Base.

At a Sept. 14 meeting of the Federal Aviation Administration’s Commercial Space Transportation Advisory Committee (COMSTAC), Maj. Gen. DeAnna Burt, director of operations and communications for the U.S. Space Force, congratulated SpaceX for the first polar launch from Cape Canaveral, Florida, in more than a half-century.

That Aug. 30 launch used a Falcon 9, flying south just off the Florida coast, to place into polar orbit SAOCOM 1B, a radar imaging satellite for Argentina. “It highlights the cooperation with the United States Space Force, our ranges, the FAA and the launch industry,” she said. “This launch was successful without changing any safety criteria.”

The launch raised questions about whether more polar launches, by the Falcon 9 or other vehicles, could take place from Cape Canaveral. That would potentially move missions from Vandenberg, the California site that has traditionally hosted launches to polar orbits.

Burt said the Space Force didn’t anticipate shifting launches, as well as launch infrastructure investments, from Vandenberg to the Cape. “We don’t expect any changes to Vandenberg resulting from this activity,” she said. “Vandenberg continues to provide a capability today that cannot be fully replicated.”

Vandenberg has attracted commercial launch providers that plan to conduct launches, particularly of small vehicles, to polar orbits. Firefly Aerospace is converting a former Delta 2 launch site into a pad for its Alpha launch vehicle, scheduled to make its inaugural launch later this fall. Relativity Space announced an agreement with the Air Force in June to study establishing a new launch site at Vandenberg.

SpaceX, despite rumors to the contrary, is not abandoning Vandenberg either. The next Falcon 9 launch from the site is scheduled for November, when a Falcon 9 will launch Sentinel-6 Michael Freilich, a NASA/ESA Earth science mission. Several other commercial and government launches of Falcon 9 rockets are manifested for launch from Vandenberg in 2021 and beyond. In addition, the company’s website lists more than a dozen job openings there, primarily as launch engineers and technicians.

Burt, in her keynote at the COMSTAC meeting, emphasized ongoing efforts to streamline operations at both Cape Canaveral and Vandenberg to increase launch capacity. Among those measures is a requirement that launch companies shift to an autonomous flight safety system, or AFSS, by October 2025, which will allow the Space Force to phase out older range safety systems.

Some companies, like SpaceX, already use AFSS, while others are testing the technology. “By 2025 they need to be on AFSS or they need to find a way to fund the legacy range capabilities that will remain on the range if they require them,” Burt said of launch companies.

Those efforts have already had results. The Eastern Range, she said, was prepared to support three launches over the course of a weekend in late August, including two Falcon 9 launches the same day as well as a Delta 4 Heavy launch. Weather and technical problems spread out the launches.

“The goal is to get to near-simultaneous missions on a given day,” she said.