Fusion propulsion research to enable rapid deep space travel has landed a professor at The University of Alabama in Huntsville (UAH), a part of the University of Alabama System, a $143,000 inaugural Interstellar Initiative Grants award from the Limitless Space Institute (LSI). Dr. Jason Cassibry, an associate professor of mechanical and aerospace engineering and an assistant research profe

Dr. Jason Cassibry, an associate professor of mechanical and aerospace engineering and an assistant research professor at the UAH Propulsion Research Center (PRC), has been studying fusion and pulsed fission/fusion hybrid (PuFF) propulsion systems for 10 years in collaboration with his NASA colleagues.

"This grant gives us funding to do real fusion experiments in pulsed fusion, based on ideas we have been developing during that time," Dr. Cassibry says.

"This technology really becomes helpful for destinations to Mars and beyond," he says. "A Mars trip will take about two or three months each way, compared to six to 12 months with alternative propulsion technologies."

LSI is a non-profit organization whose mission is to inspire and educate the next generation to travel beyond the solar system and to research and develop enabling technologies. LSI envisions the ability to go incredibly fast to any destination as the single most important performance metric to enable bold human exploration of the outer solar system and the stars. The Interstellar Initiatives Grants were initiated to spur significant advances in performance characteristics of spacecraft power and propulsion systems.

For a decade Dr. Cassibry has been guiding toward completion a repurposed nuclear weapons effects simulator called Charger-1 at UAH's Aerophysics Research Center, operating from the Aerophysics Research Facility located on Redstone Arsenal, so it can perform fundamental research on fusion propulsion. Some of that hardware will be utilized for this research.

Dr. Cassibry's team has recently moved into a new lab in Building 400 of the former Executive Plaza, now a part of the UAH campus. On the team with him are Dr. Gabe Xu, an associate professor of mechanical and aerospace engineering; Sumontro Sinha, a PRC research associate; Allen Davis, a PRC research engineer; Jacob Kinsey, a graduate research assistant (GRA); and an additional GRA to be named.

"Rapid deep space travel requires really high energy density," Dr. Cassibry says. "You can either use a solar sail or laser light craft to push your way to a destination, or you can use nuclear power."

For rapid interplanetary space travel there really are not a lot of alternatives to those approaches, he says.

"We proposed to conduct experimental and modeling investigations into a low-energy path to controlled thermonuclear fusion for rapid interplanetary and interstellar propulsion," Dr. Cassibry says.

The experiments funded by the grant will study new innovations to achieve fusion breakeven, the moment when plasmas in a fusion device release at least as much energy as is required to heat them.

"Controlled fusion allows a relatively clean and safe way of delivering high energy density and gives us a spacecraft that could, for example, reach Neptune in just a few years compared with about 15 years using current technologies like chemical-fueled engines and planetary flyby maneuvers."

"We are extremely excited to be on campus working with students on what we anticipate will be a groundbreaking adventure this next calendar year," Dr. Cassibry says.


Related Links
University of Alabama in Huntsville
Powering The World in the 21st Century at Energy-Daily.com 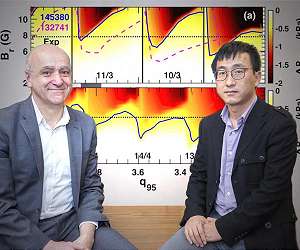 Scientists propose method for eliminating damaging heat bursts in fusion device
Plainsboro NJ (SPX) Sep 02, 2020
Picture an airplane that can only climb to one or two altitudes after taking off. That limitation would be similar to the plight facing scientists who seek to avoid instabilities that restrict the path to clean, safe and abundant fusion energy in doughnut-shaped tokamak facilities. Researchers at the U.S. Department of Energy's (DOE) Princeton Plasma Physics Laboratory (PPPL) and General Atomics (GA) have now published a breakthrough explanation of this tokamak restriction and how it may be overco ... read more