After more than 2,400 days on the near side of the moon, China's Chang'e-3 lunar mission continues to help scientists unravel the unknown about the Earth's companion in space. As of Sept. 1, the Chang'e-3 lunar mission has been on the moon for 2,453 Earth days, and some of the scientific payloads carried by the lander are still operating, according to the Lunar Exploration and Space Progra

After more than 2,400 days on the near side of the moon, China's Chang'e-3 lunar mission continues to help scientists unravel the unknown about the Earth's companion in space.

As of Sept. 1, the Chang'e-3 lunar mission has been on the moon for 2,453 Earth days, and some of the scientific payloads carried by the lander are still operating, according to the Lunar Exploration and Space Program Center of the China National Space Administration.

After analyzing the transmitted data, Chinese researchers recently reported finding multilayered young lava flows in the northeast of Mare Imbrium, also called Sea of Rains, where the Chang'e-3 mission made a soft landing in December 2013.

The surface of the Moon features numerous large basins caused by bombardments of asteroids about 3.9 billion years ago. They were filled with dark basalt lava flows from volcanic eruptions. The eruptions produced successive layers of basalt stacked in a vertical sequence, which, scientists believe, harbors the history of the moon.

The lunar penetrating radar on board helps see below the surface.

In previous studies, the region is thought to be formed by one layer of a thick lava flow.

The researchers calculated the spatial variation and distribution of thickness of each layer and built a 3D stratigraphic model of young mare basalts.

According to the researchers, the young lava flows in the northern Mare Imbrium probably erupted from the same source as that in the southwest.

The research findings have been published in the journal Geophysical Research Letters.

China's Chang'e-3 moon mission delivered the rover Yutu, or Jade Rabbit, and a stationary lander to the lunar surface on Dec. 14, 2013, marking the first moon landing since the Soviet Union's Luna 24 mission in 1976.

It touched down on the northern Mare Imbrium, a region not directly sampled before and far from the U.S. Apollo lunar landing sites.

Yutu traveled a total of 114 meters following a zigzagging route, before coming to a halt due to technical glitches.

The findings based on the data gathered by the mission have been published in leading international scientific journals. 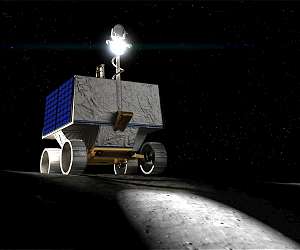 NASA enlists commercial partners to fly payloads to Moon
Washington DC (SPX) Sep 09, 2020
NASA has issued another request to its 14 Commercial Lunar Payload Services (CLPS) partners to bid on flying a suite of payloads to the Moon. The request asks partners to fly 10 NASA science investigations and technology demonstrations to a non-polar region of the Moon in 2022. Through the CLPS initiative, NASA taps its commercial partners to quickly land scientific instruments and technology demonstrations on the Moon. The initiative is a key part of NASA's Artemis program. The science and ... read more