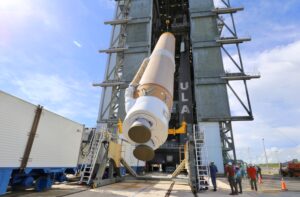 WASHINGTON — United Launch Alliance has begun assembling the Atlas 5 rocket that will launch a classified spy satellite sometime before the end of the year, the company said Sept. 11 via Twitter.

The vehicle will get three new GEM-63 strap-on solid boosters made by Northrop Grumman. This will be the first Atlas 5 using Northrop Grumman’s solid rocket boosters instead of those from ULA’s previous supplier Aerojet Rocketdyne.

The Atlas 5 is scheduled to launch the NROL-101 mission for the National Reconnaissance Office.

The performance of the GEM-63 boosters will serve as a preview for a larger GEM-63XL version that Northrop Grumman is developing for ULA’s future launch vehicle Vulcan Centaur.

While ULA builds the Atlas 5 for NROL-101 it also is working to get another NRO satellite launched on a Delta 4 Heavy.

The launch of NROL-44 has been on hold following a hot fire abort on Aug. 29 three seconds before the vehicle was scheduled to lift off from Space Launch Complex 37 at Cape Canaveral, Florida.

ULA’s CEO Tory Bruno said on Twitter on Sept. 9 that the company identified the problem that caused the automated control system to abort the mission.

“Found root cause of the pad side stuck regulator. Torn diaphragm, which can occur over time,” Bruno tweeted.

A new launch attempt is planned no earlier than Sept. 18.

The Delta 4 Heavy has three RS-68A engines. In the Aug. 29 launch attempt, the starboard engine started but the vehicle shut down before the core engine was ignited.

There are three regulators on the ground, one for each engine.

Bruno said the company is “verifying the condition of the other 2 regs. We will replace or rebuild as needed, re-test, and then resume towards launch.”

Experts said the high pressure regulator is not something that is typically removed and replaced. But the age of the equipment appears to be a factor that contributed to the torn diaphragm. The diaphragm is made of a polymer based material that can become less pliable over time, these experts said, and noted that the regulators are nearly two decades old, part of the original equipment from when ULA took over SLC-37.

NASA constructed SLC-37 in the 1960s for the Apollo-Saturn program. Starting in the late 1990s, the pad was modified to serve as the launch site for Delta 4, according to a factsheet.

NROL-44 will be the 12th mission for the Delta 4 Heavy and the first of the final five to be flown between now and 2024. Two of the five will be from Vandenberg Air Force Base, California. Sources said that after the Aug. 29 abort, ULA sent crews out to Vandenberg to inspect the ground systems there.