Findings from the "Mighty Mice" investigation on the International Space Station (ISS) may help "save the day" both for earthbound patients with muscle and bone loss as well as astronauts on prolonged spaceflight missions. This week, researchers from The Jackson Laboratory, UConn Health, and Connecticut Children's published an article in the journal PNAS detailing results from their rodent resea

Findings from the "Mighty Mice" investigation on the International Space Station (ISS) may help "save the day" both for earthbound patients with muscle and bone loss as well as astronauts on prolonged spaceflight missions. This week, researchers from The Jackson Laboratory, UConn Health, and Connecticut Children's published an article in the journal PNAS detailing results from their rodent research investigation sponsored by the ISS U.S. National Laboratory.

The mice studied on the ISS included regular "wild type" mice, genetically identical mice treated with a drug to inhibit two key signaling proteins-myostatin and activin A, and mice with a deletion of the myostatin gene. The team found that during spaceflight, muscle mass increased in the mice treated with the drug and was maintained in those with the genetic deletion.

Findings from this investigation demonstrate that the inhibition of myostatin and activin A had a significant protective effect against microgravity-induced muscle and bone loss. These results have important implications for the development of therapies to combat muscle and bone loss both on and off Earth.

Muscles and Bones in Microgravity
In the absence of gravity, muscle and bone are not subjected to the same level of activity and mechanical loading as on Earth, except during resistive exercise. For this reason, extended spaceflight results in a loss of skeletal muscle and bone mass. On Earth, people who have certain musculoskeletal conditions, such as disuse atrophy, have signs of muscle and bone loss similar to those experienced by astronauts during prolonged missions in space.

If some of the same chemical signaling pathways involved in maintaining muscle and bone homeostasis on Earth are affected in microgravity, then studying the disruption of these pathways in humans and animal models in space can serve as accelerated models of human disease. One such signaling pathway that plays an important role in maintaining muscle and bone is regulated by the secreted signaling proteins myostatin and activin A.

Myostatin is a growth factor that plays a critical role in regulating skeletal muscle mass in humans and mice. Mice genetically engineered to lack the myostatin gene exhibit dramatic muscle growth and have about double the muscle mass as regular "wild type" mice. Activin A is another growth factor involved in regulating both muscle and bone mass. Mice treated with a drug that inhibits myostatin and activin A signaling have not only more muscle mass but also significantly increased bone density.

Mighty Mice in Space
The Jackson Laboratory, UConn Health, and Connecticut Children's research team sought to determine whether the inhibition of myostatin and activin A signaling can prevent or mitigate microgravity-induced muscle and bone loss in mice on the ISS. The 40 mice sent to the orbiting laboratory included regular wild type mice, mice treated with a drug to inhibit myostatin and activin A signaling, and mice with a deletion of the myostatin gene.

The team compared the spaceflight mice, which stayed onboard the ISS for 33 days, with genetically identical control mice on the ground. The team found that the wild type mice exposed to microgravity lost significant muscle and bone mass unless treated with the drug to inhibit myostatin and activin A signaling. The team also found that the mice lacking the myostatin gene maintained their increased muscle mass in microgravity.

These findings demonstrate that targeting the myostatin/activin A signaling pathway has significant beneficial effects in protecting against microgravity-induced muscle and bone loss. The results are important because they suggest that such a strategy could be used in the development of therapies to prevent or treat muscle and bone loss in both astronauts during long-duration spaceflight as well as patients on Earth.

For example, targeting this pathway could be used to help people with disuse atrophy, such as the elderly and those who are bedridden or use a wheelchair, as well as those who experience muscle and bone loss due to various other conditions such as muscular dystrophy, osteoporosis, and diseases that cause muscle wasting such as cancer, heart disease, sepsis, and AIDS

"The ISS National Lab is proud to have worked with The Jackson Laboratory, a non-profit biomedical research institution, and the research team led by Principal Investigator Dr. Se-Jin Lee, Dr. Emily Germain-Lee, as well as NASA astronauts Drew Morgan, Christina Koch, and Jessica Meir, who not only participated in the experiment while it was on the space station but are also co-authors on the research publication," said Dr. Michael Roberts, interim chief scientist at the Center for the Advancement of Science in Space (CASIS), which manages the ISS National Lab. "This investigation again shows the power of space-based research to accelerate the pace of biomedical discovery for those living on Earth." 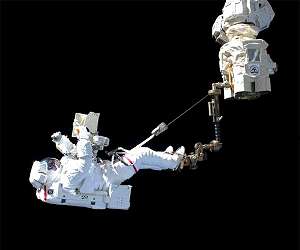 Prolonged microgravity exposure doesn't cause loss of brain tissue
Washington DC (UPI) Sep 04, 2020
Long-term space travel can have a variety of effects on the physiology of astronauts. New research suggests prolonged exposure to microgravity does cause parts of the brain to reorganize itself, but does not trigger neurodegeneration, the loss of brain tissue. For the new study, published Friday in the journal Science Advances, researchers imaged the brains of 11 male cosmonauts from Russia who spent an average of roughly six months in space. Seven months later, the team followed up with a seco ... read more