Carbon-rich exoplanets may be made of diamonds

As missions like NASA's Hubble Space Telescope, TESS and Kepler continue to provide insights into the properties of exoplanets (planets around other stars), scientists are increasingly able to piece together what these planets look like, what they are made of and if they could be habitable or even inhabited. In a new study published recently in The Planetary Science Journal, a team of rese

As missions like NASA's Hubble Space Telescope, TESS and Kepler continue to provide insights into the properties of exoplanets (planets around other stars), scientists are increasingly able to piece together what these planets look like, what they are made of and if they could be habitable or even inhabited.

In a new study published recently in The Planetary Science Journal, a team of researchers from Arizona State University and the University of Chicago have determined that some carbon-rich exoplanets, given the right circumstances, could be made of diamonds and silica. "These exoplanets are unlike anything in our solar system," said lead author Harrison Allen-Sutter of ASU's School of Earth and Space Exploration.

Diamond exoplanet formation
When stars and planets are formed, they do so from the same cloud of gas, so their bulk compositions are similar. A star with a lower carbon-to-oxygen ratio will have planets like Earth, comprised of silicates and oxides with a very small diamond content (Earth's diamond content is about 0.001%).

But exoplanets around stars with a higher carbon-to-oxygen ratio than our sun are more likely to be carbon-rich. Allen-Sutter and co-authors Emily Garhart, Kurt Leinenweber and Dan Shim of ASU, with Vitali Prakapenka and Eran Greenberg of the University of Chicago, hypothesized that these carbon-rich exoplanets could convert to diamond and silicate, if water (which is abundant in the universe) were present, creating a diamond-rich composition.

Diamond-anvils and X-rays
To test this hypothesis, the research team needed to mimic the interior of carbide exoplanets using high heat and high pressure. To do so, they used high pressure diamond-anvil cells at co-author Shim's Lab for Earth and Planetary Materials.

As they predicted, with high heat and pressure, the silicon carbide reacted with water and turned into diamonds and silica.

Habitability and inhabitability
So far, we have not found life on other planets, but the search continues. Planetary scientists and astrobiologists are using sophisticated instruments in space and on Earth to find planets with the right properties and the right location around their stars where life could exist.

For carbon-rich planets that are the focus of this study, however, they likely do not have the properties needed for life.

While Earth is geologically active (an indicator of habitability), the results of this study show that carbon-rich planets are too hard to be geologically active and this lack of geologic activity may make atmospheric composition uninhabitable. Atmospheres are critical for life as it provides us with air to breathe, protection from the harsh environment of space and even pressure to allow for liquid water.

"Regardless of habitability, this is one additional step in helping us understand and characterize our ever-increasing and improving observations of exoplanets," said Allen-Sutter. "The more we learn, the better we'll be able to interpret new data from upcoming future missions like the James Webb Space Telescope and the Nancy Grace Roman Space Telescope to understand the worlds beyond our own solar system." 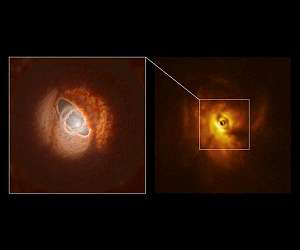 New observations show planet-forming disc torn apart by its three central stars
Munich, Germany (SPX) Sep 04, 2020
A team of astronomers have identified the first direct evidence that groups of stars can tear apart their planet-forming disc, leaving it warped and with tilted rings. This new research suggests exotic planets, not unlike Tatooine in Star Wars, may form in inclined rings in bent discs around multiple stars. The results were made possible thanks to observations with the European Southern Observatory's Very Large Telescope (ESO's VLT) and the Atacama Large Millimeter/submillimeter Array (ALMA). ... read more