The hydrogen atom, with its single proton orbited by a single electron, is arguably the simplest material out there. Elemental hydrogen can nonetheless exhibit extremely complex behavior - at megabar pressures, for example, it undergoes a transition from being an insulating fluid to being a metallic conductive fluid. While the transition is fascinating simply from the point of view of cond

The hydrogen atom, with its single proton orbited by a single electron, is arguably the simplest material out there. Elemental hydrogen can nonetheless exhibit extremely complex behavior - at megabar pressures, for example, it undergoes a transition from being an insulating fluid to being a metallic conductive fluid.

While the transition is fascinating simply from the point of view of condensed matter physics and materials science - liquid-liquid phase transitions are rather unusual - it also has significant implications for planetary science, since liquid hydrogen makes up the interior of giant planets such as Jupiter and Saturn as well as brown dwarf stars.

Understanding the liquid-liquid transition is then a central part of accurately modelling the structure and evolution of such planets and standard models generally assume a sharp transition between the insulating molecular fluid and the conducting metallic fluid. This sharp transition is linked to a discontinuity in density and therefore a clear border between an inner metallic mantle and an outer insulating mantle in these planets.

While scientists have made considerable efforts to explore and characterize this transition as well as dense hydrogen's many unusual properties - including rich and poorly understood solid polymorphism, anomalous melting line, and the possible transition to a superconducting state - laboratory investigation is complicated because of the need to create a controllable high pressure and temperature environment as well as to confine hydrogen during measurements.

Experimental research has then not yet reached a consensus on whether the transition is abrupt or smooth and different experiments have located the liquid-liquid transition at pressures that are as much as 100 gigapascals apart.

"The kind of experiment that you need to be able to do to be able to study a material in the same range of pressures that you find on Jupiter is highly non-trivial," Ceriotti said. "As a result of the constraints, many different experiments have been performed, with results that are very different from each other."

Though modelling techniques introduced in the last decade have allowed scientists to better understand the system, the huge computational expense involved in essentially solving the quantum mechanical problem for the behavior of hydrogen atoms has meant that these simulations were necessarily limited in time, to a scale of a few picoseconds, and to a scope of just a few hundred atoms. Results here have also been mixed.

In order to examine the problem more thoroughly, Ceriotti and colleagues Bingqing Chen at the University of Cambridge and Guglielmo Mazzola at IBM Research Zurich used an artificial neural network architecture to construct a machine learning potential.

Based on a small number of very accurate (and time consuming) calculations of the electronic structure problem, the inexpensive machine-learning potential allowed for the investigation of hydrogen phase transitions for temperatures between 100 and 4000 K, and pressures between 25 and 400 gigapascals, with converged simulation size and time.

The simulations, mostly run on EPFL computers at SCITAS, took just a few weeks compared with the 100s of millions of years in CPU time that it would have taken to run traditional simulations for solving the quantum mechanical problem.

The resulting theoretical study of the phase diagram of dense hydrogen allowed the team to reproduce the re-entrant melting behavior and the polymorphism of the solid phase. Simulations based on the machine learning potential showed, contrary to the common assumption that hydrogen undergoes a first-order phase transition, evidence of continuous metallization in the liquid. This in turn not only suggests a smooth transition between insulating and metallic layers in giant gas planets, it also reconciles existing discrepancies between both lab and modelling experiments.

"If high-pressure hydrogen is supercritical, as our simulations suggest, there is no sharp transition where all the properties of the fluid have a sudden jump," Ceriotti said. "Depending on the exact property you probe, and the way you define a threshold, you would find the transition to occur at a different temperature or pressure. This may reconcile a decade of controversial results from high pressure experiments. Different experiments have measured slightly different things and they haven't been able to identify the transition at the same point because there is no sharp transition."

In terms of reconciling their results with some earlier modelling that indeed identified a sharp transition, Ceriotti says that they could only observe a clear-cut jump in properties when performing small simulations, and that in those cases they could trace the jump to solidification, rather than to a liquid-liquid transition.

The sharp transition observed should then rather be understood as an artifact of the limitations of using simulations based on traditional physics-based modelling. The machine learning approach has allowed the researchers to run simulations that are typically between 4 and 10 times larger and several 100s of times longer. This gives them a much better overview of the entire process.

While it was applied in this particular paper to an issue linked to planetary science, the same technology can be applied to any problem in materials science or chemistry, Ceriotti said.

"This is a demonstration of a technology that allows simulations to get into a regime that has been impossible to reach," Ceriotti said. "The same technology that we could use to understand better the behavior of planets can also be used to design better drugs or more performing materials. There really is the potential for a simulation-driven change of the way we understand the behavior of everyday, as well as exotic, matter." 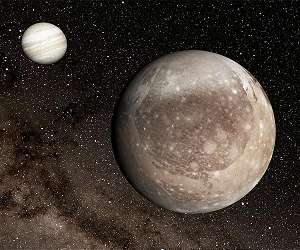 Technology ready to explore subsurface oceans on Ganymede
Kiruna, Sweden (SPX) Aug 24, 2020
The first of two Swedish-led Jupiter instruments has left the Swedish Institute of Space Physics (IRF) to take its place on the European spacecraft JUICE. The Radio and Plasma Wave Investigation instrument (RPWI) will measure electric and magnetic fields to identify and map the oceans beneath the frozen ice cover of the moon Ganymede. In 2013, IRF was selected by the European Space Agency (ESA) to participate in one of their largest projects in planetary explorat ... read more