On Aug. 17, the Air Force Research Laboratory's (AFRL's) Satellite Assessment Center (SatAC) celebrated its 30-year anniversary. Through its skilled workforce and leading edge software and modeling programs, the men and women of SatAC are helping to ensure that imperative is kept.

"The Satellite Assessment Center is one of the space community's essential agencies, relied upon to answer some of the most challenging technological issues facing our on-orbit assets," said Dr. Kelly Hammett, the director of AFRL's Directed Energy Directorate. "It is my pleasure to recognize SatAC's 30-year storied history in meeting our country's space superiority mission. I am proud to lead such a dedicated team of professionals and pay honor to the many SatAC team members who proceeded them."

Several scientists and engineers who held SatAC positions in the past, continue to work at the laboratory in support of the nation's space mission. Long-time AFRL engineer Quentin Dierks looks back at the organization.

"The SatAC organization was born out of the Strategic Defense Initiative era, and was dedicated to pioneering and conducting unique analysis for space systems in support of critical programs across the Department of Defense (DoD) in the Space Domain Awareness and Space Superiority mission areas," said Dierks, the Space Electro-Optics division's chief engineer.

Dierks joined the SatAC team in 1993, ended his time with the program as branch chief in 2006, and was recently promoted to chief engineer of the AFRL Space Vehicles Directorate.

"It was very exciting to figure out how to solve new problems, build the tools, and conduct the analysis tasks in support of important DoD programs," Dierks said. "Though technology has changed significantly since the early '90s the need for SatAC and the mission they perform has not, and if anything, the situation is more challenging and more important than ever before."

During its 30-year history, the SatAC has experienced many successes because of the expertise and dedication of scores of laboratory researchers and technicians.

In the tragic 2003 space program event that rocked the nation, SatAC models were used in conjunction with imagery taken at AFRL's Starfire Optical Range on Kirtland, to assist NASA engineers in the analysis of the space shuttle Columbia's breakup during re-entry.

"On Mar. 23, 2020, the Secretary of the Air Force identified AFRL's Space Electro-Optics Division as one of 23 units performing critical U.S. Space Force missions," said Col. Peter Norton, the Space Electro-Optics division chief. "Within our division, the SatAC team is core to meeting warfighter needs. And with the establishment of our U.S. Space Force, the criticality of the Space Domain mission has been elevated."

As the Department of the Air Force advances the country's space superiority mission and space warfighting doctrine, AFRL's Satellite Assessment Center will continue to help secure the nation's ability to operate freely in space as it enters its 31st year and beyond. 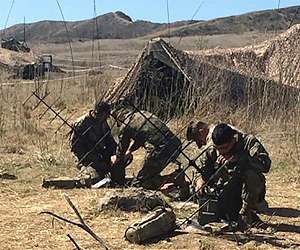