The Department of the Air Force, in partnership with U.S. Northern Command and U.S. Space Command, held a second, more complex and rigorous field test Aug. 31 to Sept. 3 of an innovative and evolving approach to joint warfighting known as the Advanced Battle Management System. In the latest exercise, known as an "onramp," operators used ABMS to detect and defeat efforts to disrupt U.S. ope

The Department of the Air Force, in partnership with U.S. Northern Command and U.S. Space Command, held a second, more complex and rigorous field test Aug. 31 to Sept. 3 of an innovative and evolving approach to joint warfighting known as the Advanced Battle Management System.

In the latest exercise, known as an "onramp," operators used ABMS to detect and defeat efforts to disrupt U.S. operations in space in addition to countering attacks against the U.S. homeland, including shooting down a cruise missile "surrogate" with a hypervelocity weapon. The Advanced Battle Management System, or ABMS, allows a joint force to use cutting-edge methods and technologies to rapidly collect, analyze, and share information and make decisions in real time.

"Future battlefields will be characterized by information saturation. One of the key objectives of this onramp was to present a dizzying array of information for participants to synthesize, just like they would see in a real operation," said Dr. Will Roper, Assistant Secretary of the Air Force for acquisition, technology and logistics.

"This compelled commanders and operators to trust data analytics and artificial intelligence to understand the battle. Valuing data as an essential warfighting resource, one no less vital than jet fuel or satellites, is the key to next-gen warfare," Roper said.

ABMS collected and fused information in new ways by also making the information available instantaneously across geographically-separated forces spanning the operational to tactical levels of combat.

The weeklong onramp further tested and refined technologies necessary for ABMS, which is building the "internet of things" of the military that collects and makes sense of vast amounts of data supported by artificial intelligence. ABMS links weapon systems and personnel in the air, on the ground, at sea as well as space and cyber domains in a seamless manner that has not yet been available to today's warfighters.

This latest installment of ABMS was a significant advance in both size and ambition from the first, which was held in December. The most recent onramp included 70 industry teams, 65 government teams from every service including the Coast Guard, 35 military platforms, 30 geographic locations and four national test ranges, all contributing to what officials say could be the largest joint experiment in recent history.

ABMS, which is the top modernization priority for the Department of the Air Force with a budget of $3.3 billion over five years, will be the backbone of a network-centric approach in partnership with all the services across the Department of Defense. That broader effort is known as Joint All-Domain Command and Control (JADC2). When fully realized, senior leaders say JADC2 will allow U.S. forces from all services-as well as allies-to receive, fuse and act upon a vast array of data and information in all domains at the speed of relevance.

Aside from the system's embrace of a different warfighting philosophy and practice, ABMS is utilizing an approach to developing the complex system that breaks with traditional defense approaches and practices.

Project managers say the goal is speed and utility, which means that some ABMS components are being developed from products that can be derived from commercially available technology when applicable. It requires a close working relationship with industry partners and a willingness to push experimentation of innovative ideas in order to learn what works and what doesn't on short time horizons.

"The winner is going to be the one who is able to adapt rapidly in the face of change and uncertainty," said Preston Dunlap, Department of the Air Force chief architect. "We have to bake agility into the recipe as its most basic ingredient."

Managers of the exercise said the sheer size and complexity of the latest iteration of the onramp presented a challenge to the operators that accurately reflected the realities and uncertainties of a potential conflict.

After the field test ended, Roper said that some capabilities are ready to be used. Chief among them, he said, is using cloud computing.

Senior leaders and developers are stressing speed and setting an ambitious schedule of onramps to be held every four months or so to advance the capabilities demonstrating the most promise and provide opportunities for operational commanders to begin to use ABMS capabilities as they emerge in their day-to-day operations.

"Modern warfare demands data and information at the edge, anywhere on earth," said Chief of Space Operations Gen. John "Jay" Raymond. "Potential adversaries are investing heavily in these fields, and we must exploit new approaches to sustain the advantage. We are exploring how to use JADC2 and ABMS to link sensors to shooters across all battlespaces, at speed and under threat. Maturing these concepts and capabilities is necessary to fight and win in the information age."

Air Force Chief of Staff Gen. Charles Q. Brown, Jr., who has previously served in leadership roles in Europe, the Middle East and the Indo-Pacific, assesses that ABMS is a capability that is needed today and not later, citing its imperative for deterrence and its application for Joint All Domain Operations.

"To win the contested, high-end fight, we need to accelerate how we field critical technologies today," Brown said. "Rapid, iterative experimenting ultimately places relevant capability in warfighters' hands faster. We cannot afford to slow our momentum on ABMS. Our warfighters and combatant commands must fight at internet speeds to win."

Gen. Glen D. VanHerck, commander of U.S. Northern Command, said after the field test that he was impressed. "You can be skeptical of that technology," VanHerck said, referring to using artificial intelligence and machine learning to process information.

"I am not skeptical after today," he said. 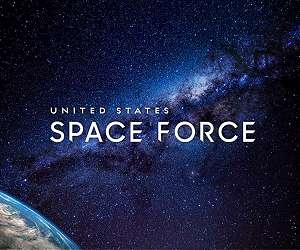 Airmen to transfer into Space Force beginning Sept 1
Washington DC (AFNS) Sep 02, 2020
Beginning Sept. 1 and continuing throughout the fall, more than 2,400 active-duty Airmen in space operations (13S) and space systems operations (1C6) career fields will transfer into the U.S. Space Force in public and private ceremonies across the globe. Given limits on mass gatherings in the current COVID-19 environment, the Space Force will commemorate the transfers with a virtual swearing-in ceremony Sept. 15 following live remarks from Chief of Space Operations Gen. John "Jay" Raymond during t ... read more