An unexpected origin story for a lopsided black hole merger

A lopsided merger of two black holes may have an oddball origin story, according to a new study by researchers at MIT and elsewhere. The merger was first detected on April 12, 2019 as a gravitational wave that arrived at the detectors of both LIGO (the Laser Interferometer Gravitational-wave Observatory), and its Italian counterpart, Virgo. Scientists labeled the signal as GW190412 and det

A lopsided merger of two black holes may have an oddball origin story, according to a new study by researchers at MIT and elsewhere.

The merger was first detected on April 12, 2019 as a gravitational wave that arrived at the detectors of both LIGO (the Laser Interferometer Gravitational-wave Observatory), and its Italian counterpart, Virgo. Scientists labeled the signal as GW190412 and determined that it emanated from a clash between two David-and-Goliath black holes, one three times more massive than the other. The signal marked the first detection of a merger between two black holes of very different sizes.

Now the new study, published in the journal Physical Review Letters, shows that this lopsided merger may have originated through a very different process compared to how most mergers, or binaries, are thought to form.

It's likely that the more massive of the two black holes was itself a product of a prior merger between two parent black holes. The Goliath that spun out of that first collision may have then ricocheted around a densely packed "nuclear cluster" before merging with the second, smaller black hole - a raucous event that sent gravitational waves rippling across space.

GW190412 may then be a second generation, or "hierarchical" merger, standing apart from other first-generation mergers that LIGO and Virgo have so far detected.

"This event is an oddball the universe has thrown at us - it was something we didn't see coming," says study coauthor Salvatore Vitale, an assistant professor of physics at MIT and a LIGO member. "But nothing happens just once in the universe. And something like this, though rare, we will see again, and we'll be able to say more about the universe."

Vitale's coauthors are Davide Gerosa of the University of Birmingham and Emanuele Berti of Johns Hopkins University.

A struggle to explain

"You can think of this like a couple being together all their lives," Vitale says. "This process is suspected to happen in the disc of galaxies like our own."

In both the common envelope process and the dynamical interaction scenario, the merging black holes should have roughly the same mass, unlike the lopsided mass ratio of GW190412. They should also have relatively no spin, whereas GW190412 has a surprisingly high spin.

"The bottom line is, both these scenarios, which people traditionally think are ideal nurseries for black hole binaries in the universe, struggle to explain the mass ratio and spin of this event," Vitale says.

Black hole tracker
In their new paper, the researchers used two models to show that it is very unlikely that GW190412 came from either a common envelope process or a dynamical interaction.

They first modeled the evolution of a typical galaxy using STAR TRACK, a simulation that tracks galaxies over billions of years, starting with the coalescing of gas and proceeding to the way stars take shape and explode, and then collapse into black holes that eventually merge. The second model simulates random, dynamical encounters in globular clusters - dense concentrations of stars around most galaxies.

The team ran both simulations multiple times, tuning the parameters and studying the properties of the black hole mergers that emerged. For those mergers that formed through a common envelope process, a merger like GW190412 was very rare, cropping up only after a few million events. Dynamical interactions were slightly more likely to produce such an event, after a few thousand mergers.

However, GW190412 was detected by LIGO and Virgo after only 50 other detections, suggesting that it likely arose through some other process.

"No matter what we do, we cannot easily produce this event in these more common formation channels," Vitale says.

The process of hierarchical merging may better explain the GW190412's lopsided mass and its high spin. If one black hole was a product of a previous pairing of two parent black holes of similar mass, it would itself be more massive than either parent, and later significantly overshadow its first-generation partner, creating a high mass ratio in the final merger.

A hierarchical process could also generate a merger with a high spin: The parent black holes, in their chaotic merging, would spin up the resulting black hole, which would then carry this spin into its own ultimate collision.

"You do the math, and it turns out the leftover black hole would have a spin which is very close to the total spin of this merger," Vitale explains.

No escape
If GW190412 indeed formed through hierarchical merging, Vitale says the event could also shed light on the environment in which it formed. The team found that if the larger of the two black holes formed from a previous collision, that collision likely generated a huge amount of energy that not only spun out a new black hole, but kicked it across some distance.

"If it's kicked too hard, it would just leave the cluster and go into the empty interstellar medium, and not be able to merge again," Vitale says.

If the object was able to merge again (in this case, to produce GW190412), it would mean the kick that it received was not enough to escape the stellar cluster in which it formed. If GW190412 indeed is a product of hierarchical merging, the team calculated that it would have occurred in an environment with an escape velocity higher than 150 kilometers per second. For perspective, the escape velocity of most globular clusters is about 50 kilometers per second.

This means that whatever environment GW190412 arose from had an immense gravitational pull, and the team believes that such an environment could have been either the disk of gas around a supermassive black hole, or a "nuclear cluster" - an incredibly dense region of the universe, packed with tens of millions of stars.

"This merger must have come from an unusual place," Vitale says. "As LIGO and Virgo continue to make new detections, we can use these discoveries to learn new things about the universe." 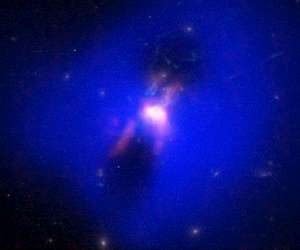 Can black hole fire up cold heart of the Phoenix
Tokyo, Japan (SPX) Sep 01, 2020
Radio astronomers have detected jets of hot gas blasted out by a black hole in the galaxy at the heart of the Phoenix Galaxy Cluster, located 5.9 billion light-years away in the constellation Phoenix. This is an important result for understanding the coevolution of galaxies, gas, and black holes in galaxy clusters. Galaxies are not distributed randomly in space. Through mutual gravitational attraction, galaxies gather together to form collections known as clusters. The space between galaxies is no ... read more