Beginning Sept. 1 and continuing throughout the fall, more than 2,400 active-duty Airmen in space operations (13S) and space systems operations (1C6) career fields will transfer into the U.S. Space Force in public and private ceremonies across the globe. Given limits on mass gatherings in the current COVID-19 environment, the Space Force will commemorate the transfers with a virtual sweari

Beginning Sept. 1 and continuing throughout the fall, more than 2,400 active-duty Airmen in space operations (13S) and space systems operations (1C6) career fields will transfer into the U.S. Space Force in public and private ceremonies across the globe.

Given limits on mass gatherings in the current COVID-19 environment, the Space Force will commemorate the transfers with a virtual swearing-in ceremony Sept. 15 following live remarks from Chief of Space Operations Gen. John "Jay" Raymond during the Air Force Association's Virtual Air, Space and Cyber Conference. In addition to the ceremonial swearing-in, members can also opt for private events or participate in locally organized ceremonies.

"This is a momentous occasion for the Space Force and for each of these space professionals," said Raymond. "We intend to give our newest Space Force members and their families the special recognition they deserve, while at the same time share this historic event with the American people."

To officially transfer from one military service to another, a military member separates from the current service and commissions or enlists into the new service in their current rank. On the official date of transfer, enlisted members will be administered the Oath of Enlistment and sign enlistment contracts into the Space Force.

Officers will be administered the Oath of Office and sign official Space Force commissioning documents. Both officers and enlisted members will incur a minimum two-year active-duty service commitment in volunteering for the transfer.

"There has been substantial planning behind the scenes between the Space Force and Air Force personnelists to get us to this day," said Patricia Mulcahy, deputy chief of space operations for personnel and logistics.

"We understand the personal circumstances that influence a member's decision to volunteer for transfer, and I am incredibly proud of the team's thoughtfulness put into every decision to ensure we provide members with as seamless a transfer process as possible."

The Space Force is holding virtual town halls to provide an opportunity for members to ask questions related to transfers and ceremonies. Details on required documents to transfer, sample ceremony scripts and related information, are available on the Air Force Portal at my.af.mil. 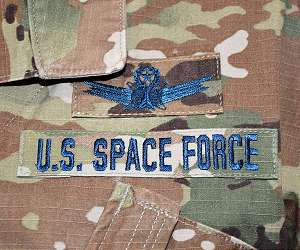