A team including researchers from the Institute for Astrophysics of the University of Cologne has for the first time directly observed the columns of matter that build up newborn stars. This was observed in the young star TW Hydrae system located approximately 163 light years from Earth. This result was obtained with the Very Large Telescope Interferometer (VLTI) and its GRAVITY instrument

A team including researchers from the Institute for Astrophysics of the University of Cologne has for the first time directly observed the columns of matter that build up newborn stars. This was observed in the young star TW Hydrae system located approximately 163 light years from Earth.

This result was obtained with the Very Large Telescope Interferometer (VLTI) and its GRAVITY instrument of the European Southern Observatory (ESO) in Chile. The article 'A measure of the size of the magnetospheric accretion region in TW Hydrae' has been published in a recent issue of Nature.

The formation of stars in the Galaxy involves processes in which primordial matter such as gas and dust present in the giant molecular clouds is rapidly aggregated via gravity to form a protostar. This 'accretion' of gas occurs through the disk that forms around the newborn star and represents the major mechanism of supply of material to the growing central baby star. These so-called protoplanetary disks are one of the key ingredients to explain the formation of very diverse exoplanets that are to date frequently discovered orbiting our closest neighbours.

Based on theoretical and observational evidence, many scenarios were hypothesized to describe the mechanism of interaction between the star and the parent circumstellar disk, like for instance the funnelling and accretion of host gas onto the central star along the local magnetic field. But this could never be directly observed and proven so far with any telescope.

The main reason is that the level of details of the image - astronomers talk about angular resolution - necessary to observe what happens very close to the star was simply out of reach. For comparison, detecting these events would be like discerning a small one-cubic meter box on the surface of the Moon.

With a normal telescope, this is not possible. However, with an interferometer like the VLTI in Chile and its instrument GRAVITY, which delivers unprecedented angular resolution in the infrared, such a precise observation has now become possible. An interferometer collects and combines the light from different telescopes a few hundred meters apart, which provides the same level of accuracy as a hypothetical giant telescope with a comparable diameter.

With the contribution of members of Cologne's Institute for Astrophysics, astrophysicists from several European institutions exploited the GRAVITY instrument at the VLTI to probe the closest regions around the young solar analog TW Hydrae, which is thought to be the most representative example of what our Sun may have looked like at the time of its formation, more than 5 billion years ago.

By measuring very precisely the typical angular size of the very inner gaseous regions - using a particular infrared atomic transition of the hot hydrogen gas - the scientists were able to directly prove that the hot gas emission was indeed resulting from magnetospheric accretion taking place very close to the stellar surface.

'This is an important milestone in our attempt to confirm the mechanisms at work in the field of star formation', said Professor Lucas Labadie, co-author of the paper. 'We now want to extend such exploration to other young stars of different nature to understand how the evolution of the circumstellar disk, the birthplace of planets, goes.' T

he team is part of the GRAVITY collaboration, named after the instrument that was co-developed by the University of Cologne and which combines interferometrically the four large 8-m telescopes of ESO in Chile. The team members include Lucas Labadie, Rebekka Grellmann, Andreas Eckart, Matthew Horrobin, Christian Straubmeier and Michael Wiest.

'This result illustrates what is the unique potential of interferometry at the VLTI', added Dr Christian Straubmeier, team member and co-investigator of the GRAVITY instrument in Cologne. 'This is why we decided to look ahead and develop the upgrade GRAVITY+ in the hope of being able to observe and image even fainter objects than what GRAVITY currently does.'


Related Links
University Of Cologne
Stellar Chemistry, The Universe And All Within It 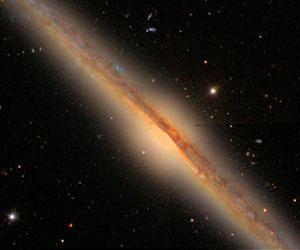 New study questions decades of research on the evolution of spiral galaxies
Lisbon, Portugal (SPX) Aug 27, 2020
Most spiral galaxies are characterized by a disk, where stars, gas and dust spread out in a characteristic pattern of twisted spiral arms, and a bright central area, named the bulge. When studying how galaxies form and evolve, it is crucial to differentiate between these two components. This represents a scientific challenge and previous studies have traditionally assumed that the disk brightness increases exponentially all the way to the galactic centre. This common assumption is challenged in a ... read more