The U.S. Army's most advanced Patriot missile misfired during a major test of the Army's Integrated Battle Command System, an Army official confirmed.

Two interceptors were fired at a target missile, and although "the system did what it was designed to do," he said, the Capability-3 Patriot Missile Segment Enhancement missile misfired.

An older variant of the Patriot missile brought down the target, part of the common test practice of firing two missiles at a target in the event the first missile misses.

In an earlier test of the ICBS that day, the new missile "successfully intercepted a high-performance, high-speed tactical ballistic missile target and a cruise missile target," the Army said in a statement. It did not issue a statement pertinent to the misfire.

"Root cause analysis on the MSE misfire is ongoing, but preliminary indications are that all IBCS commands to the launcher were executed successfully," Rottenborn said. "The error may lie within the missile, but further analysis is required to determine that with certainty."

The ICBS system is built by Northrop Grumman, while Patriot missiles are built by Lockheed Martin.

The missile defense system test will be conducted through September, and a production decision is anticipated by the end of the year.

ICBS is the cornerstone of the Army's Integrated Air and Missile Defense strategy, Northrop Grumman has said. It is intended to replace legacy systems with a network-centric approach, integrating disparate radars and weapons for a more complete weapons enterprise. 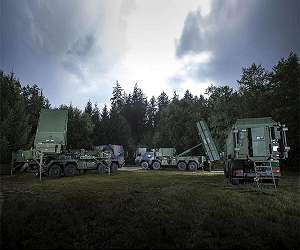