If bacteria form thick enough aggregates - large populations of bacteria cells with multicellular structures - they could partially survive the long trip to Mars, according to a new study published Wednesday in the journal Frontiers in Microbiology. To better understand the resiliency of bacteria aggregates, researchers dried, or desiccated, different-sized aggregates of a radioresist

If bacteria form thick enough aggregates -- large populations of bacteria cells with multicellular structures -- they could partially survive the long trip to Mars, according to a new study published Wednesday in the journal Frontiers in Microbiology.

To better understand the resiliency of bacteria aggregates, researchers dried, or desiccated, different-sized aggregates of a radioresistant bacteria strain belonging to the genus Deinococcus, and placed them in exposure panels outside of the International Space Station.

After spending one to three years outside the space station, scientists tested for the survival of the bacterial colonies. Researchers confirmed partial survival in all the aggregates thicker than 0.5 millimeters.

"The results suggest that radioresistant Deinococcus could survive during the travel from Earth to Mars and vice versa, which is several months or years in the shortest orbit," lead researcher Akihiko Yamagishi, professor of life sciences at Tokyo University, said in a news release.

Though the outer layers of cells in each of the bacteria aggregate had died, these layers formed a protective barrier, allowing portions of the bacteria colony to survive up to three years in space.

The findings could have implications for the search for alien life, researchers said.

Scientists have previously hypothesized that life didn't have spontaneously emerge on Earth. Bacteria could have arrived from elsewhere, via the theoretical migration of microbes through space, or "panspermia."

Others have questioned whether bacteria could survive prolonged exposure to dramatic temperature fluctuations, radiation and other space-based hazards.

"The origin of life on Earth is the biggest mystery of human beings. Scientists can have totally different points of view on the matter," Yamagishi said. "Some think that life is very rare and happened only once in the universe, while others think that life can happen on every suitable planet. If panspermia is possible, life must exist much more often than we previously thought."

Scientists have previously found Deinococcus bacteria drifting as high as 7.5 miles above Earth's surface. Now, scientists can confirm that Deinococcus aggregates can live for up to three years in space.

To better gauge the plausibility of panspermia, scientists must now study bacteria's ability to survive the ejection and landing phases of a theoretical journey from one planet to another. 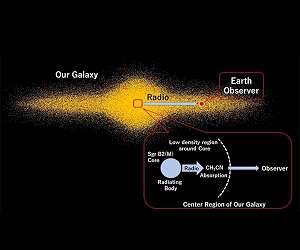 Tracing the cosmic origin of complex organic molecules with their radiofrequency footprint
Tokyo, Japan (SPX) Aug 26, 2020
The origin of life on Earth is a topic that has piqued human curiosity since probably before recorded history began. But how did the organic matter that constitutes lifeforms even arrive at our planet? Though this is still a subject of debate among scholars and practitioners in related fields, one approach to answering this question involves finding and studying complex organic molecules (COMs) in outer space. Many scientists have reported finding all sorts of COMs in molecular clouds - gigantic r ... read more