Ball Aerospace has successfully completed on-orbit testing of NASA's Green Propellant Infusion Mission (GPIM), which included ASCENT, a non-toxic, high-performance propellant developed by the Air Force Research Laboratory (AFRL), on board a Ball-built small satellite. GPIM launched on June 25, 2019 at 2:30 a.m. EDT on board a SpaceX Falcon Heavy rocket and was commissioned in early July of

GPIM launched on June 25, 2019 at 2:30 a.m. EDT on board a SpaceX Falcon Heavy rocket and was commissioned in early July of the same year.

"The successful completion of this mission advances in-space propulsion for the entire user community, which opens up the possibility for a variety of missions," said Dr. Makenzie Lystrup, vice president and general manager, Civil Space, Ball Aerospace. "GPIM has the potential to inspire new ideas and new missions, which could mean smaller spacecraft, faster and easier ground processing, longer design lives and more - enabling science at any scale."

Ball designed and built the small satellite, which contains NASA's first opportunity to demonstrate the practical capabilities of a "green" propellant and propulsion system in orbit - an alternative to conventional chemical propulsion systems. The propellant is a Hydroxyl Ammonium Nitrate fuel and oxidizer monopropellant developed by the AFRL.

GPIM is part of NASA's Technology Demonstration Missions program within the Space Technology Mission Directorate (STMD), and Christopher McLean of Ball Aerospace serves as the principal investigator. Aerojet Rocketdyne designed and built the thruster payload for GPIM that provides propulsion for the spacecraft.

With approximately 95 percent of the demonstration completed to date, the flight mission has proven that the ASCENT fuel and compatible propulsion system can be a viable, effective alternative for NASA and the commercial spaceflight industry. GPIM will soon begin a final series of burns that will deplete the remainder of the ASCENT fuel and the spacecraft will reenter the earth's atmosphere to complete the mission.

Powered by endlessly curious people with an unwavering mission focus, Ball Aerospace pioneers discoveries that enable our customers to perform beyond expectation and protect what matters most. We create innovative space solutions, enable more accurate weather forecasts, drive insightful observations of our planet, deliver actionable data and intelligence, and ensure those who defend our freedom go forward bravely and return home safely. Go Beyond with Ball. 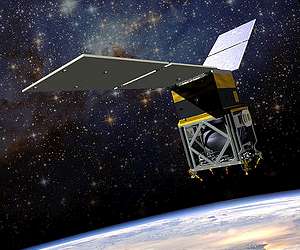 NASA's Green Propellant Infusion Mission nears completion
Huntsville AL (SPX) Aug 24, 2020
NASA just validated a new type of propellant, or fuel, for spacecraft of all sizes. Instead of toxic hydrazine, space missions can use a less toxic, "green" propellant and the compatible technologies designed to go along with it. In a little over a year since launch, NASA's Green Propellant Infusion Mission (GPIM) successfully proved a never-before-used propellant and propulsion system work as intended, demonstrating both are practical options for future missions. GPIM set out to test a mono ... read more