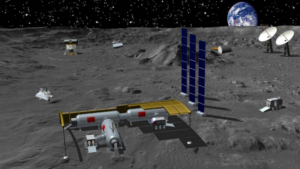 HELSINKI — China has developed a vision for an international lunar research station and is seeking international involvement in the project.

The project, named the International Lunar Research Station (ILRS), is to be situated in the lunar south pole region.

It will be developed through a number of upcoming robotic Chang’e missions across the 2020s and expanded through the 2030s.

The ILRS envisions the Chang’e-,6, -7 and -8 missions and potential international missions as forming the basic setup. In the early 2030s an expanded ILRS will involve long-term robotic and potentially short-term crewed missions. A long-term human presence at the lunar south pole is the goal for 2036-2045.

Objectives include “construction and operation of human[ity]’s first sharing platform in the lunar south pole, supporting long-term, large-scale scientific exploration, technical experiments and development and utilization of lunar resources’, according to a presentation to the Scientific and Technical Subcommittee of the Committee on the Peaceful Uses of Outer Space (COPUOS) earlier this year.

The presentation also states an intended shift from independence to cooperation in space on the part of China. International involvement in Chinese lunar missions has so far been limited to a handful of contributed payloads, mainly to the Chang’e-4 lunar far side mission.

China National Space Administration official Pei Zhaoyu stated last year that a lunar project will be jointly designed, with its implementation to be coordinated and the results and achievements to be shared.

Both Roscosmos and the European Space Agency have had discussions with China with regards contributing to the project.

The two sides have earlier agreed to open the Chinese Chang’e-7 and Russian Luna 26 missions to science payload contributions from the other party.

ESA is also quietly interested. “At ESA we are following the Chinese lunar exploration plans very closely in order to see where our respective programmatic interest could meet, primarily the CE-6, -7 and -8 missions but also the ILRS initiative”, Karl Bergquist, ESA’s international relations administrator, told SpaceNews.

ESA carried out the Double Star missions with China in the early 2000s and has assisted Chang’e missions with ground station support.

The ILRS initiative appears to somewhat echo the notion of the ‘Moon Village’ put forward by Jan Woerner, the Director General of the ESA.

Both Russia and ESA are also participating in the Artemis project, despite recent disparaging comments from Rogozin.

China is expected to launch its Chang’e-5 lunar sample return mission on a Long March 5 around November. If successful, the backup Chang’e-6 mission will then target the lunar south pole around 2023-24.

Chang’e-7 is also scheduled for around 2024. Chang’e-8, designed for in-situ resource utilization and 3D-printing technology tests, as well as life science and tentative deployment of a small scale inflatable, will follow.