A group of theoretical physicists, including two physicists from the University of Groningen, have proposed a 'table-top' device that could measure gravity waves. However, their actual aim is to answer one of the biggest questions in physics: is gravity a quantum phenomenon? The key element for the device is the quantum superposition of large objects. Their design was published in New Journal of

A group of theoretical physicists, including two physicists from the University of Groningen, have proposed a 'table-top' device that could measure gravity waves. However, their actual aim is to answer one of the biggest questions in physics: is gravity a quantum phenomenon? The key element for the device is the quantum superposition of large objects. Their design was published in New Journal of Physics on 6 August.

Already in the preprint stage, the paper that was written by Ryan J. Marshman, Peter F. Barker and Sougato Bose (University College London, UK), Gavin W. Morley (University of Warwick, UK) and Anupam Mazumdar and Steven Hoekstra (University of Groningen, the Netherlands) was hailed as a new method to measure gravity waves.

Diamond
The key part of the device is a tiny diamond, just a few nanometres in size. 'In this diamond, one of the carbons is replaced by a nitrogen atom,' explains assistant professor Anupam Mazumdar. This atom introduces a free space in the valence band, which can be filled with an extra electron. Quantum theory says that when the electron is irradiated with laser light, it can either absorb or not absorb the photon energy. Absorbing the energy would alter the electron's spin, a magnetic moment that can be either up or down.

'Just like Schrodinger's cat, which is dead and alive at the same time, this electron spin does and does not absorb the photon energy, so that its spin is both up and down.' This phenomenon is called quantum superposition. Since the electron is part of the diamond, the entire object - with a mass of about 10-17 kilograms, which is huge for quantum phenomena - is in quantum superposition.

'We have a diamond that has up spin and down spin at the same time,' explains Mazumdar. By applying a magnetic field, it is possible to separate the two quantum states. When these quantum states are brought together again by turning off the magnetic field, they will create an interference pattern. 'The nature of this interference depends on the distance the two separate quantum states have travelled. And this can be used to measure gravity waves.' These waves are contractions of space, so that their passing affects the distance between the two separated states and thus the interference pattern.

Missing link
The paper shows that this set-up could indeed detect gravity waves. But that is not what Mazumdar and his colleagues are really interested in. 'A system in which we can obtain quantum superposition of a mesoscopic object such as the diamond, and for a reasonable length of time, would be a real breakthrough,' Mazumdar says. 'It would allow all kinds of measurements to be taken, and one of those could be used to determine whether gravity itself is a quantum phenomenon.' Quantum gravity has been the 'missing link' in physics for nearly a century.

Technology
'In our latest paper, we describe how to create mesoscopic quantum superposition. With two of these systems, we were able to show entanglement.' However, as they noticed during their work, the single system would be sensitive to gravitational waves and this became the focus of the New Journal of Physics paper.

'The technology to build these systems could take a few decades to develop,' Mazumdar acknowledges. A vacuum of 10-15 Pascal is required, while the operating temperature should be as low as possible, near absolute zero (-273 C). 'Technology to achieve either high vacuum or low temperature is available, but we need the technology to achieve both at the same time.' Furthermore, the magnetic field must be constant. 'Any fluctuation would collapse the quantum superposition.'

Freefall
The reward for creating this kind of system would be great. 'It could be used for all kinds of measurements in fields such as ultra-low energy physics or quantum computing, for example.' And it could, of course, be used to determine whether gravity is a quantum phenomenon. Mazumdar, Bose and colleagues have just uploaded another preprint (2) in which they describe how this experiment could be performed.

'To ensure that the only interaction between the two entangled objects is the gravity between them, the experiment should be done in free fall,' explains Mazumdar. With visible enthusiasm, he describes a one-kilometre long drop shaft in a deep mine, to reduce interference. Two entangled mesoscopic quantum systems should be dropped repeatedly to obtain a reliable measurement. 'I think this can be done in my lifetime. And the result would finally resolve one of the biggest questions in physics.'

Related Links
University Of Groningen
The Physics of Time and Space 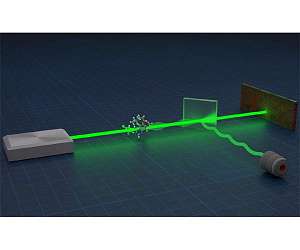 'Quantum negativity' can power ultra-precise measurements
Cambridge UK (SPX) Aug 03, 2020
Scientists have found that a physical property called 'quantum negativity' can be used to take more precise measurements of everything from molecular distances to gravitational waves. The researchers, from the University of Cambridge, Harvard and MIT, have shown that quantum particles can carry an unlimited amount of information about things they have interacted with. The results, reported in the journal Nature Communications, could enable far more precise measurements and power new technologies, ... read more