First Lieutenant Jacob "Jake" Lutz will soon complete a successful assignment with the Air Force Research Laboratory (AFRL) Space Vehicles Directorate at Kirtland Air Force Base, and will be on his way to RAF Mildenhall, located about 75 miles outside of London, for his next duty. Following his commission from the United States Air Force Academy (USAFA) with a degree in astronautical engin

First Lieutenant Jacob "Jake" Lutz will soon complete a successful assignment with the Air Force Research Laboratory (AFRL) Space Vehicles Directorate at Kirtland Air Force Base, and will be on his way to RAF Mildenhall, located about 75 miles outside of London, for his next duty.

Following his commission from the United States Air Force Academy (USAFA) with a degree in astronautical engineering, Lutz arrived at Kirtland in 2018 to begin work as a systems engineer. "I am one of the lucky USAFA grads whose degree related directly to his follow-on assignment," said Lutz.

Over the past two years, Lutz has had the good fortune to be involved in one of the Department of the Air Force's premier satellite programs, the Navigation Technology Satellite-3 (NTS-3) - a spacecraft that is developing advanced methods and technologies to increase resilience in position, navigation and timing capabilities from space.

"The NTS-3 program is developing a prototype next-generation Satellite Navigation (SATNAV) system, investigating ways to improve the satellite systems, the ground control systems, and the GPS receivers that our military uses every day," said Lutz. "I've been taking the lead on the ground control system side, working with our software developers and government team here at Kirtland, to make sure we're meeting the U.S. Space Force's needs in the years to come."

In recognition of his leadership abilities, Lutz transitioned from a systems engineer to a program manager's job within NTS-3, where he continued to broaden his skills. "Both of those jobs involve intense communication and collaboration with our partner organizations and teams," he said.

"By handling the overhead tasks, opening channels of communication between teams, and providing support to your team, engineers and scientists are able to focus on the real work at hand - supporting critical research and development that will keep the U.S. "semper supra" meaning "always above" - the Space Force's recently designated motto."

Lutz has shown himself to be a superb communicator in public forums and supported national conferences such as the Air Force Association Air, Space, and Cyber and National Space Symposium, talking about the NTS-3 satellite capabilities to senior military and industry leaders and hundreds of attendees. Lutz describes participating as an AFRL exhibitor in these high-profile events as "the most fun" part of his job.

"Jake always shows up with a huge amount of enthusiasm and excitement about space and technology," said Arlen Biersgreen, NTS-3 program manager and Lutz's supervisor.

"I remember standing with him in the exhibit hall at the 2019 Air Force Association Air, Space, and Cyber Conference, and he was like a magnet attracting in people from all backgrounds to hear about NTS-3. Whether it was a general officer, an undergraduate student, or an aircraft pilot, Jake was able to communicate the importance of our cutting-edge research and development work through a beautiful lens of patriotism and "geek-out factor" to connect with all of them. I gave so many unusual tasks to him over the past two years that he tackled with creative skill. Jake has been a key part of the NTS-3 Vanguard team and we are all going to miss him as he departs AFRL for his new assignment."

Lutz grew up in Rio Rancho, New Mexico just outside of Albuquerque, where he attended ASK (Attitude, Skills and Knowledge) Academy, a STEM charter school. "It was a great school - they really introduced me to science and engineering, opening doors that helped me to end up where I am today," Lutz said.

ASK Academy was just one influence on his career choice. "My grandpa served in Vietnam as a Huey crew chief," Lutz said. "He not only inspired me to join the military, but was a huge support of encouragement and strength during my time at the Air Force Academy. He's an amazing role model and still inspires me to this day."

Lutz is excited about his next assignment. "I'm going to RAF Mildenhall to serve a tour as an aircraft maintenance officer," Lutz said. "I love space, and I want to do it for the rest of my life. So, I thought that I should take this once-in-a-lifetime opportunity to branch out of my comfort zone and see a completely different side of the Air Force!"

Joining Lutz in this assignment will be his wife, Danae. When asked what he enjoys doing away from work Lutz related this. "I love spending time with Danae. We are both very involved at our church, I like designing graphics and making models, and I'm a HUGE Star Wars geek."

Lutz says his time at AFRL has been amazing and that he is open to where God takes him and his family in the future. "I would love to spend my career supporting American space superiority whether in the military or as a civilian. But...I did apply to join the Space Force!" 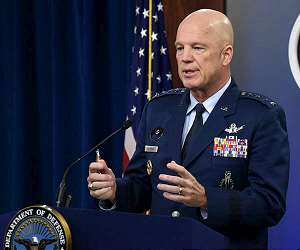 Space Force releases 1st doctrine, defines "spacepower" as distinct form of military power
Washington DC (AFNS) Aug 12, 2020
Fewer than eight months after its creation, America's newest military service published its first doctrine, the U.S. Space Force's Space Capstone Publication, entitled Spacepower. The SCP, which is the first articulation of spacepower as a separate and distinct form of military power, serves as a foundation upon which to build additional doctrine as expanding challenges are continually addressed in the changing space domain. "One of the principles of an independent service is the creation of ... read more