The Army is evaluating new air and missile defense systems -- and testing laser weapons -- after postponing some tests due to COVID-19.

The test had been scheduled for May but was pushed back due to COVID-19 safety concerns, according to Maj. Gen. Robert Rasch Jr., head of the Program Executive Office of Missiles and Space.

Now the Army plans to complete the test by September.

The 3-43 ADA, a Patriot missile unit will also be the first unit equipped with the IBCS capability once the limited user test is complete, after which the equipment and software will be refreshed to support an operational test and evaluation before 2022, when the unit is expected to achieve operational capability.

"The Army committed one of its coveted Patriot battalions, which are in high demand across the world given the current [operational] tempo requirements," Rasch said.

ICBS is the cornerstone of the Army's Integrated Air and Missile Defense strategy, according to Northrop Grumman, which partnered with the Army to develop the system.

It's intended to replaced legacy stove-piped systems with a network-centric approach, integrating disparate radars and weapons for a more complete weapons enterprise.

Bill Lamb, director, multi-domain mission command operating unit for Northrop Grumman, told the Redstone Rocket that the Army aims to have ICBS in use by 2023.

"Once the commander decides they are sufficiently trained and could go and use it," is when full production begins, he said. "The Army has indicated the timing of it being in use as early 2023."

The Army is also pursuing directed energy weapons, to include high-energy lasers and high-power microwave systems, including a a 50-kilowatt laser aboard a Stryker combat vehicle in support of air defense artillery operations, as well aa 300-kilowatt Indirect Fire Protection Capability-High Energy Laser, at the platoon level in support of brigade air defense artillery operations.

Earlier this year the Navy broke ground on a Navy weapons research center in California, with experts saying directed-energy weapons are more cost-effective than ever before, and are a particular asset in combating low-cost weapons on the battlefield.

"The world has changed over the last 18 or 19 years as we have been fighting the Global War on Terror," Lt. Gen. Neil Thurgood, director of hypersonics, directed energy, space and rapid acquisition at the Army Rapid Capabilities and Critical Technologies Office. According to Thurgood, with the signing of the National Defense Strategy, the Army is now in an era of power competition against China and Russia. 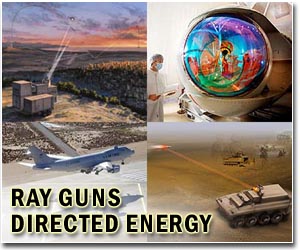