'Oumuamua isn't made from molecular hydrogen ice after all

The debate over the origins and molecular structure of 'Oumuamua continues with an announcement in the Astrophysical Journal Letters that despite earlier promising claims, the interstellar object is not made of molecular hydrogen ice after all. The earlier study, published by Seligman and Laughlin in 2020 - after observations by the Spitzer Space Telescope set tight limits on the outgassin

The debate over the origins and molecular structure of 'Oumuamua continues with an announcement in the Astrophysical Journal Letters that despite earlier promising claims, the interstellar object is not made of molecular hydrogen ice after all.

The earlier study, published by Seligman and Laughlin in 2020 - after observations by the Spitzer Space Telescope set tight limits on the outgassing of carbon-based molecules - suggested that if 'Oumuamua were a hydrogen iceberg, then the pure hydrogen gas that gives it its rocket-like push would have escaped detection. But scientists at the Center for Astrophysics | Harvard and Smithsonian (CfA) and the Korea Astronomy and Space Science Institute (KASI) were curious whether a hydrogen-based object could actually have made the journey from interstellar space to our solar system.

"The proposal by Seligman and Laughlin appeared promising because it might explain the extreme elongated shape of 'Oumuamua as well as the non-gravitational acceleration. However, their theory is based on an assumption that H2 ice could form in dense molecular clouds. If this is true, H2 ice objects could be abundant in the universe, and thus would have far-reaching implications. H2 ice was also proposed to explain dark matter, a mystery of modern astrophysics," said Dr. Thiem Hoang, senior researcher in the theoretical astrophysics group at KASI and lead author on the paper.

"We wanted to not only test the assumptions in the theory but also the dark matter proposition." Dr. Avi Loeb, Frank B. Baird Professor of Science at Harvard and co-author on the paper, added, "We were suspicious that hydrogen icebergs could not survive the journey - which is likely to take hundreds of millions of years - because they evaporate too quickly, and as to whether they could form in molecular clouds."

Traveling at a blistering speed of 196,000 mph in 2017, 'Oumuamua was first classified as an asteroid, and when it later sped up, was found to have properties more akin to comets. But the 0.2 km radius interstellar object didn't fit that category, either, and its point of origin has remained a mystery.

Researchers focused on the giant molecular cloud (GMC) W51 - one of the closest GMCs to Earth at just 17,000 light-years away - as a potential point of origin for 'Oumuamua, but hypothesize that it simply could not have made the journey intact. "The most likely place to make hydrogen icebergs is in the densest environments of the interstellar medium. These are giant molecular clouds," said Loeb, confirming that these environments are both too far away and are not conducive to the development of hydrogen icebergs.

An accepted astrophysical origin for solid objects is growth by sticky collisions of dust, but in the case of a hydrogen iceberg, this theory could not hold together. "An accepted route to form a km-sized object is first to form grains of micron-size, then such grains grow by sticky collisions," said Hoang. "However, in regions with high gas density, collisional heating by gas collisions can rapidly sublimate the hydrogen mantle on the grains, preventing them from growing further."

Although the study explored destruction of H2 ice by multiple mechanisms including interstellar radiation, cosmic rays, and interstellar gas, sublimation due to heating by starlight has the most destructive effect, and according to Loeb, "Thermal sublimation by collisional heating in GMCs could destroy molecular hydrogen icebergs of 'Oumuamua-size before their escape into the interstellar medium."

This conclusion precludes the theory that 'Oumuamua journeyed to our solar system from a GMC, and further precludes the proposition of primordial snowballs as dark matter. Evaporative cooling in these situations does not reduce the role of thermal sublimation by starlight in the destruction of H2 ice objects.

'Oumuamua first gained notoriety in 2017 when it was discovered screaming through space by observers at Haleakala Observatory, and has since been the subject of ongoing studies. "This object is mysterious and difficult to understand because it exhibits peculiar properties we have never seen from comets and asteroids in our solar system," said Hoang.

While the nature of the interstellar traveler is currently an unsolved mystery, Loeb suggests it won't remain so for much longer, especially if it's not alone. "If 'Oumuamua is a member of a population of similar objects on random trajectories, then the Vera C. Rubin Observatory (VRO), which is scheduled to have its first light next year, should detect roughly one 'Oumuamua-like object per month. We will all wait with anticipation to see what it will find."

Research Report: "Destruction of Molecular Hydrogen Ice and Implications for 1I/2017 U1 ('Oumuamua)" 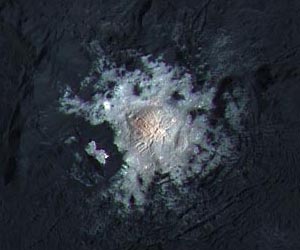 Bright hydrothermal deposits on dwarf planet Ceres have a style all their own
Columbia, MD (SPX) Aug 14, 2020
Data from NASA's recent Dawn mission show that salty groundwaters in Occator Crater on Ceres were driven to the surface by impact heat and formed low mounds and pits, as well as thin sheets of sodium-carbonate minerals from multitudes of small hot-spring seeps. Using a combination of stereo images and detailed topographic maps derived from Dawn observations, scientists from the Lunar and Planetary Institute (LPI) and other institutional participants on the Dawn project have mapped the distribution ... read more