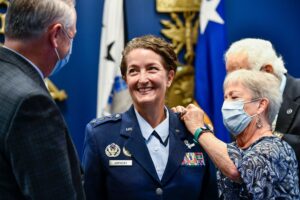 Armagno was commissioned into the Space Force and promoted to three-star general Aug.

She was previously the director of space programs in the Air Force’s acquisition branch. Armagno was the only Air Force officer to command both major U.S. space launch facilities, the Eastern and Western Ranges.

Lt. Gen. B. Chance Saltzman last week also transferred from the Air Force to the Space Force and assumed a new position as deputy chief of space operations, cyber and nuclear.

Both Armagno and Saltzman were nominated for promotion by President Trump on July 28 and confirmed by the Senate on Aug. 6.