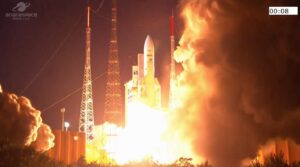 WASHINGTON — Arianespace on Aug. 15 launched two communications satellites and a satellite servicer on an Ariane 5 rocket, completing the company’s first launch since the reopening of the Guiana Space Center in Kourou, French Guiana.

Ariane 5 lifted off at 6:04 p.m. Eastern and deployed the spacecraft into geostationary transfer orbits over the course of 48 minutes. The launch was delayed two weeks to replace a problematic sensor on the rocket’s first stage, and again by a day because of upper level winds. Weather introduced a 34-minute delay prior to liftoff.

The launch is Arianespace’s first from the Guiana Space Center in six months, and first overall in five months. The European launch provider’s last mission was a March Soyuz launch from Russia’s Baikonur Cosmodrome in Kazakhstan on behalf of OneWeb, the megaconstellation startup that stopped launching that same month after filing for Chapter 11 bankruptcy protection.

Arianespace had suspended launches from Kourou in March shortly after the World Health Organization declared the coronavirus had reached pandemic levels. The French government, which operates the spaceport through its space agency CNES, began discouraging travel around that time and reduced activity at the spaceport.

CNES and Arianespace resumed spaceport activities in French Guiana in May, paving the way for Ariane 5 and Vega launches, which only take place from the Guiana Space Center.

Arianespace’s Aug. 15 Ariane 5 launch, designated VA253, was unique in that it carried three multi-ton spacecraft instead of two. It is the first time an Ariane 5 has launched three spacecraft to geostationary transfer orbit.

The three spacecraft collectively weighed about 9,700 kilograms. Arianespace said the Ariane 5 debuted improvements from to support a maximum of 10,200 kilograms of payload to geostationary transfer orbit, an 85-kilogram increase.

“As part of this mission, three satellites were deployed by the most powerful Ariane 5 ever launched,” Arianespace CEO Stéphane Israël said in a news release after the launch.

ArianeGroup, manufacturer of the Ariane 5, said the rocket has increased in payload capacity by 300 kilograms since 2016.

The next-generation Ariane 6, expected to launch no earlier than the second half of 2021, is designed to lift up to 11,500 kilograms to geostationary transfer orbit, with room to improve in later years. ArianeGroup is also building that rocket.

Northrop Grumman has a contract with Intelsat to extend the life of the 16-year-old Intelsat 10-02 communications satellite by five years. The companies agreed to dock MEV-2 and Intelsat 10-02 directly in geostationary orbit, an event that may require the satellite to pause service for 20 to 30 minutes, according to Intelsat. The two spacecraft will dock in 2021, Stephen Spengler, Intelsat chief executive, said during a prerecorded launch video.

Northrop Grumman’s first servicer, MEV-1, is also docked with an Intelsat satellite, but that took place in a “graveyard orbit” a few hundred kilometers above active satellites in the geostationary arc. Northrop Grumman and Intelsat said they learned enough from that experience in February to simplify the process this time by conducting the docking in geostationary orbit.

The satellite is the first in a series of replacements for Intelsat’s Galaxy fleet, which consists of 10 satellites over North and South America. Intelsat’s global fleet numbers around 50 satellites.

Galaxy-30 is a replacement for Intelsat’s Galaxy-14 satellite, an 11-year-old satellite from Maxar Technologies that launched on a United Launch Alliance Atlas 5 in 2009. Intelsat is not seeking reimbursement for the satellite as part of its effort to clear C-band spectrum in the United States for the Federal Communications Commission.

Intelsat ordered Galaxy-30 before the FCC had decided to auction 300 megahertz of C-band spectrum and require satellite operators to vacate the spectrum. The company has ordered six C-band replacement satellites (four from Maxar Technologies and two from Northrop Grumman) to continue service with less spectrum and pursue $4.87 billion in accelerated spectrum clearing payments, and is in negotiations with manufacturers for one more satellite.

Bsat-4b is a backup for another Bsat satellite, Bsat-4a, which launched in 2017, also on an Ariane 5 rocket. The company ordered Bsat-4b from Maxar Technologies in 2018 with the anticipation of having the satellite in orbit ahead of the 2020 Tokyo Olympic Games, which have since been delayed to 2021 because of the coronavirus pandemic. Bsat-4b carries a Ku-band payload for television broadcasting in resolutions up to 8K ultra-HD.

Israël said Arianespace’s next launch will be a long awaited Vega mission on Sept. 1 carrying 53 smallsats. That mission was planned for June, but experienced delays because of persistent upper level winds.