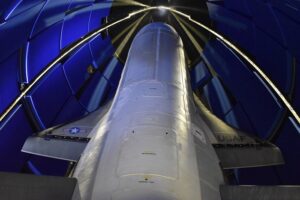 The X-37B was one of nine nominees that included NASA’s Hubble Space Telescope and the Stratolaunch carrier aircraft.

The NAA said the X-37B won for “developing and employing the world’s only reusable, autonomous spaceplane, which logged more than 2,865 days in orbit across five missions, changing access to space and serving as the nation’s workhorse in space experimentation and technology.”

The reusable spaceplane is sent to low Earth orbit for long missions that can last up to two years. The Air Force operates two X-37B spacecraft made by Boeing.

The spaceplane is a derivative of the X-37A designed by NASA in the late 1990s to deploy from the space shuttle. The program later was transferred to the Defense Department and is now managed by the Air Force Rapid Capabilities Office.

Originally designed for missions of 270 days, the X-37B has set endurance records during each of its five completed flights. Its first mission launched in 2010. In 2019, the spaceplane broke its own on-orbit endurance record of 718 days.

The sixth mission of the X-37B spaceplane lifted off May 17, 2020, from Cape Canaveral Air Force Station in Florida.

Randall Walden, director and program executive officer of the Air Force Rapid Capabilities Office, said the service plans to continue to support the X-37B program. “Right now we plan on keeping it,” he said Aug. 13 during a Mitchell Institute webinar. “There’s a lot of interest in reusable space vehicles.”

“The Collier Trophy celebrates the record-setting mission of the X-37B,” Secretary of the Air Force Barbara Barrett said in a statement. “The X-37B advances reusable spaceplane technologies and operates experiments in space that are returned for further examination on Earth.”