The U.S. Air Force selected United Launch Alliance (ULA) as one of two launch service providers under the National Security Space Launch Phase 2 Launch Services Procurement (LSP). Aerojet Rocketdyne will provide two RL10 rocket engines to power the upper stage of ULA's Vulcan Centaur launch vehicle, as well as the thrusters that control the stage while in flight and the composite overwrapp

Aerojet Rocketdyne will provide two RL10 rocket engines to power the upper stage of ULA's Vulcan Centaur launch vehicle, as well as the thrusters that control the stage while in flight and the composite overwrapped pressure vessels that store gases required for operation of the launch vehicle.

"Aerojet Rocketdyne has supported the nation's most important national security space missions for decades. We will now bring the RL10 engine's tremendous record of mission success to support the next generation of American National Security Space Launch missions.

Under the LSP contract, ULA will support approximately 60% of missions starting in 2022 and continuing through the next five years.

The RL10 engine's outstanding performance and reliability has made it the upper-stage engine of choice for the nation. Built in West Palm Beach, Florida, the RL10 engine is currently used to power the upper stages of ULA's Delta IV and Atlas V rockets, and has supported earlier versions of those vehicles dating back to the early 1960s.

The flight-proven RL10 engine provided the upper-stage propulsion to place hundreds of military, civil and commercial satellites into orbit and has sent spacecraft on their journeys to explore every planet in our solar system.

The RL10 engine has been continuously upgraded throughout its service life with recent efforts focused on incorporating additive manufacturing to enhance affordability while maintaining its unequaled performance.

"With 500 engines flown in space, the RL10 has an unmatched reputation worldwide," added Drake. "We look forward to continuing our strong partnership with ULA as we provide an advanced RL10 engine for Vulcan."

The Vulcan's Centaur upper stage will also include 12 Aerojet Rocketdyne MR-107 thrusters, built in Redmond, Washington, that are used to control vehicle orientation and trajectory during the latter stages of the launch sequence.

ARDE, a subsidiary of Aerojet Rocketdyne located in Carlstadt, New Jersey, will also build the composite overwrapped pressure vessels that support operation of the launch vehicle. 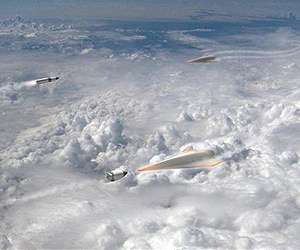