L3Harris's novel integration of electronically-steerable phased-array antennas, flexible waveform generators, and commercial off-the-shelf technologies helped them secure the NTS-3 contract in December 2018. Having passed CDR review, L3Harris will continue their work on the satellite in preparation for an anticipated launch in 2022.

AFRL will operate NTS-3 in geosynchronous orbit for a year. The spacecraft will broadcast experimental PNT signals that will test new architectures designed to increase resilience to signal interference and responsiveness to warfighter needs.

In 2019, the U.S. Air Force designated NTS-3 as one of three Vanguard programs that aim to deliver remarkable new capabilities that provide warfighters with superior advantages in the battlefield. In addition to the space-based test vehicle, the NTS-3 program will demonstrate advanced ground-based command and control and agile software-defined radios for the user.

"The NTS-3 Vanguard is an experimental, end-to-end demonstration of agile, resilient space-based positioning, navigation, and timing," said Arlen Biersgreen, Air Force NTS-3 Program Manager. "It has the potential for game-changing advancements to the way the Air Force provides these critical capabilities to warfighters across the Department of Defense."

he Air Force's contract for the NTS-3 prototype satellite provides a follow-on option for rapid production and deployment of an entire constellation of satellites in geosynchronous orbit. The technology's potential to bolster and enhance GPS will strengthen America's PNT solution for decades to come. 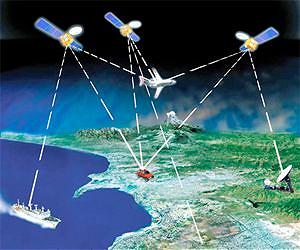 Beidou's eye can help spot and stop rampant illegal mining
Beijing (XNA) Aug 07, 2020
More than 100 officials in Gansu province were held accountable three years ago for illegal coal mining on the northern slope of the Qilian Mountains on the Gansu-Qinghai border. However, nobody has been held accountable yet for illegal coal mining on the southern slope of the mountains in Qinghai province. Recent media reports say large-scale open-pit coal mines have inflicted irreversible ecological damage on the mountains that are not only the northern rim of the ecologically delicate Qinghai-T ... read more