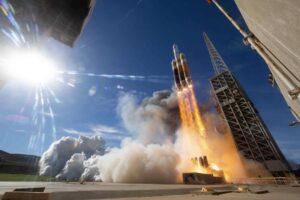 WASHINGTON — The government of the state of California announced Aug. 5 it has inked an agreement to develop commercial space launch infrastructure at Vandenberg Air Force Base.

Vandenberg Air Force Base, established in 1941, is home to the sprawling Western Range, used for civil and commercial space launch as well as missile tests.

The U.S. Space Force’s 30th Space Wing operates the base.

The base is looking to increase its commercial activity as more private companies develop launch vehicles. Emerging space companies like Firefly and Relativity Space plan to launch rockets from Vandenberg.

Space investment is a piece of a larger strategy for economic development in the central coast region, said Chris Dombrowski, acting director of the Governor’s Office of Business and Economic Development.

Dombrowski said the state signed a memorandum of understanding with the 30th Space Wing, Cal Poly State University, Deloitte and the economic impact organization REACH to develop a spaceport at Vandenberg Air Force Base and the surrounding area.

He said the organizations under the MOU will develop a “master plan that identifies the required infrastructure, human capital development, governance and financing necessary to support the United States Space Force mission and position California as a leader in the future of the commercial space industry.”

“This MOU serves as a critical investment in California’s innovative economy as we work to safely recover from the COVID-19 induced recession,” he said.

“The spacelift industry requires an environment stimulated by opportunity,” Mastalir said Aug. 5 on an virtual forum hosted by Deloitte.

“Vandenberg Air Force Base is prepared to provide the technical support and insight so commercial providers can better navigate the challenges of working in the central coast,” he said.