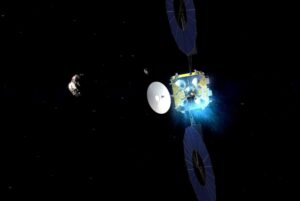 The call indicates that development of the Chang’e-7 mission is progressing. CNSA issued an international call for science payloads for the near-Earth asteroid sampling return and a main belt comet orbiting mission in 2019, indicating formal approval of the project.

Chang’e-7 is a part of an expanded Chinese lunar exploration program targeting the south pole of the Moon . The expansion builds on a plan initiated in the early 2000s to orbit, land and rover on, and return samples from the moon.

The Chang’e-7 mission will consist of an orbiter and a lander which will deploy both a rover and a ‘mini-flying probe’. A relay satellite will support the mission. This could be an uprated version of the Queqiao relay satellite for the ongoing Chang’e-4 lunar far side mission.

Launch is currently planned for around 2024 on a Long March 5 heavy-lift launcher. Chang’e-8, designed for in-situ resource utilization and 3D printing technology tests, will follow as a stepping stone to a potential permanent robotic base.

ZhengHe, named for an 14-15th Century naval explorer and admiral, will target near-Earth asteroid 2016 HO3 (469219 Kamoʻoalewa) and return 200-1,000 grams of samples within 2-3 years of launch. The mission would then, via an Earth gravity assist, reach the main belt comet 133P/Elst-Pizarro seven years later. Earlier presentations include an additional gravity assist from Mars, whereas more recent profiles outline a flyby of an unnamed asteroid en route to 133P.

The mission will launch on a Long March 3B rocket from Xichang. The spacecraft will utilize electric propulsion, autonomous navigation and intelligent control functions. Asteroid 2016HO3 has a diameter in the range of 40-100 meters and orbits between 38–100 Earth-Moon distances from the Earth. Explosives will be used to expose the subsurface for detection with water and volatiles as key targets.

Both missions will draw on technology from Chang’e-5, a lunar sample return mission scheduled to launch in Q4 this year. That mission aims to retrieve up to 4 kilograms of samples from the Mons Rümker region of Oceanus Procellarum. If successful mission the would also pave the way for a possible repeat at the lunar south pole with the backup Chang’e-6 spacecraft.

The various Chang’e-7 spacecraft will carry a total of 23 science payloads. The configuration is still to be confirmed, according to a presentation at the 51st Lunar and Planetary Science Conference.

Chang’e-7 will aim to conduct a detailed survey of the environment and resources in the lunar south polar region. Technology goals include a fixed-point landing, building on the Chang’e-4 far side landing. The ‘mini-flying probe’ will carry out in-situ observations of a permanently-shadowed crater. The novel spacecraft will carry a water molecule and hydrogen isotope analyzer payload.

The orbiter will carry a high-resolution stereo mapping camera, SAR and infrared imagers, a neutron and gamma ray spectrometer and a magnetometer. The relay satellite will assist in Earth-Moon Very Long Baseline Interferometry (VLBI) measurement and radio astronomy observations.

Meanwhile on the surface, the lander and rover will have a combination of earlier Chang’e mission payloads. These include topography and panoramic cameras, ground-penetrating radar and ultraviolet camera. New experiments will include a seismometer, magnetometer and raman spectrometer.

ZhengHe aims to reveal the characteristics and evolution mechanisms of typical small celestial bodies. It will also study the interaction of these bodies with solar wind, and perform lab analysis on samples.

The spacecraft will use robotic legs to land on 2016HO3. Attached to the robotic appendages will be drills to anchor the spacecraft to the relatively quickly rotating asteroid. ZhengHe will also carry a nano-orbiter and a nano-lander to carry out remote sensing and provide complementary information for sampling. Additional science payloads may be attached to the rocket’s upper stage, according to an announcement of opportunities (pdf).

Chang’e-2 made a flyby of near-Earth asteroid 4179 Toutatis in December 2012. The activity was an extension to its primary mission as a lunar orbiter.

Preparations are meanwhile being made for a crewed flight. A China Academy of Launch Vehicle Technology (CALT) facility social media release shows assembly of components of the Long March 2F to launch Shenzhou-12. Shenzhou-12 is to make the first visit to the ‘Tianhe’ core module of the Chinese space station, following the launch of the 22-metric-ton facility in H1 2021.

China’s sixth and most recent crewed flight was the month-long Shenzhou-11 mission in 2016.