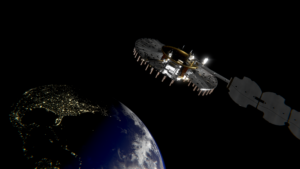 WASHINGTON — L3Harris will start building a navigation satellite for the U.S. Air Force scheduled to be launched to a geosynchronous orbit in 2022.

The Air Force announced July 30 that the Navigation Technology Satellite-3 (NTS-3) on June 25 passed a critical design review, allowing the contractor L3Harris to move forward with production of the spacecraft.

The company passed a preliminary design review in February.

L3Harris will integrate the NTS-3 payload with an ESPAStar bus for a planned 2022 launch. The goal is to show that a spacecraft in higher geosynchronous orbit can supplement the Global Positioning System that operates from medium Earth orbit.

“The experiment will demonstrate capabilities that can be accomplished through a stand-alone satellite constellation or as a hosted payload,” Ed Zoiss, president of L3Harris Space and Airborne Systems, said in a statement.

The Space Enterprise Consortium in 2018 selected L3Harris for the $84 million NTS-3 contract. The consortium is an organization within the Space Force’s Space and Missile Systems Center created to bring commercial technologies into military programs.

Technologies developed in the NTS-3 program such as electronically steerable phased-array antennas and flexible waveform generators could be be used in the next generation of GPS satellites, the Air Force said.

Once deployed, NTS-3 will be operated by the Air Force Research Laboratory’s Space Vehicles Directorate. The spacecraft will broadcast experimental PNT (positioning, navigation, timing) signals that will be used to test anti-jam technologies to improve the resilience of GPS signals.

Arlen Biersgreen, Air Force NTS-3 program manager, said the program “has the potential for game-changing advancements to the way the Air Force provides these critical capabilities to warfighters across the Department of Defense.”