Astra ready for first in a series of orbital launch attempts 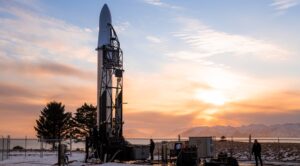 Astra’s Rocket 3.1 vehicle is in final preparations for a launch from Pacific Spaceport Complex – Alaska on Kodiak Island.

The company is targeting a launch on Aug. 2 during a two-hour window that opens at 10 p.m. Eastern, but executives said in a July 30 call with reporters that there’s a 60% chance of unfavorable weather that day. The company has additional launch opportunities each day through Aug. 7.

The launch is the first in a series of three the company plans to carry out to demonstrate the rocket’s ability to achieve orbit. This launch is primarily focused on testing the performance of the rocket’s first stage.

“We don’t intend to hit a hole-in-one here,” said Chris Kemp, chief executive and co-founder of Astra. “We intend to accomplish enough to ensure that we’re able to get to orbit after three flights, and for us that means a nominal first-stage burn and getting the upper stage to separate successfully.”

If all goes well, the rocket’s five first-stage engines will fire for 2 minutes and 20 seconds, followed by the payload fairing separation and stage separation. The second stage’s single engine would then ignite for a burn lasting about seven minutes.

While Rocket 3.1 is designed to place 25 kilograms into orbit, this launch is not carrying any payload. “That’s both to increase margin and because we believe that’s it’s pretty unlikely that it will work,” said Adam London, co-founder and chief technology officer. “We don’t want to put a payload at risk unnecessarily.”

Instead, Astra will seek to collect as much data as possible from the launch. “We believe that we learn fastest by getting flight data,” London said. “We have lots of things that can only be tested and learned in flight.”

Astra attempted to launch a version of this vehicle, called Rocket 3.0, in March from Kodiak as the final competitor in the DARPA Launch Challenge. However, on the final day of the competition the company scrubbed its launch attempt less than a minute before liftoff.

London said there was an “anomalous signal” in data while the launch vehicle was pressurizing prior to launch. The company traced the problem to an issue with a fuel tank on the rocket that was corrected with a combination of hardware and software changes.

The company made a second attempt to launch the rocket in late March, but the company said the vehicle was damaged during pre-launch testing. At the time Astra provided no additional information, although there was industry speculation that the vehicle was destroyed.

London said that a valve on the rocket malfunctioned while offloading propellant from the rocket after a “wet dress rehearsal,” where the rocket is fueled and goes through a practice countdown. That valve problem “led to an overpressurization and, ultimately, the loss of the vehicle.”

The company fixed the valve issue “in three or four different ways,” he said, along with making other changes to what is now Rocket 3.1. “A number of different fixes were made to make sure that we don’t experience something similar this time.”

Astra has also been affected by the pandemic, Kemp said. The company furloughed some staff, although many have since been recalled and the rest may be called back to work if the upcoming launch goes well. “That was challenging for the team, but it did give us the time we needed to do these three launches before we raise capital again,” he said. “Our objective as a company is to remain viable, and the plans did have to change as a result of having to slow things down a little bit.”

Kemp says Astra believes there’s still demand for low-cost, frequent access to space for small satellites, despite the competition from other small launch vehicles in various phases of development.

“We’re working hard to build a competitive service that is a lot more affordable,” he said, comparing Astra to Rocket Lab, the current leader among small launch companies. “A lot of customers who come to us feel like they’re far too expensive, so what we’re trying to do is build a service that has a lower cost to operate.”