With the help of the Mars Express orbiter and its Visual Monitoring Camera, astronomers at the European Space Agency have spotted the return of a mysterious cloud on the Red Planet. The long, narrow cloud of water ice was observed on the leeward side of Arsia Mons, a large volcano near Mars' equator. Mars Express captured images of the recurring feature in mid-July and scientists at ESA

With the help of the Mars Express orbiter and its Visual Monitoring Camera, astronomers at the European Space Agency have spotted the return of a mysterious cloud on the Red Planet.

The long, narrow cloud of water ice was observed on the leeward side of Arsia Mons, a large volcano near Mars' equator. Mars Express captured images of the recurring feature in mid-July and scientists at ESA shared the photos online this week.

"This elongated cloud forms every martian year during this season around the southern solstice, and repeats for 80 days or even more, following a rapid daily cycle," astronomer Jorge Hernandez-Bernal said in an ESA news release.

"However, we don't know yet if the clouds are always quite this impressive," said Hernandez-Bernal, a postdoctoral candidate at the University of the Basque Country in Spain.

Hernandez-Bernal is leading the effort to document and analyze unusual Martian clouds. Scientists on the project recently named the planet's most prominent cloud the Arsia Mons Elongated Cloud, or AMEC.

Mars is currently experiencing its southern solstice, during which the sun is positioned to the south of the equator. Early in the morning, during the southern solstice, long, wispy clouds like AMEC often form, growing quickly before disappearing by afternoon.

Most orbiters snap photos of Mars in the afternoon, but Mars Express does its observing in the morning, when southern clouds are more likely to appear.

"The extent of this huge cloud can't be seen if your camera only has a narrow field of view, or if you're only observing in the afternoon," said Eleni Ravanis, grad student and researcher in training on the Mars Express mission.

"Luckily for Mars Express, the highly elliptical orbit of the spacecraft, coupled with the wide field of view of the VMC instrument, lets us take pictures covering a wide area of the planet in the early morning," Ravanis said. "That means we can catch it!" 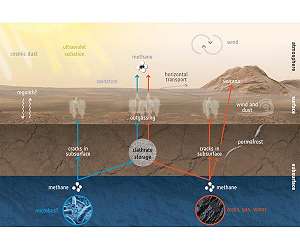