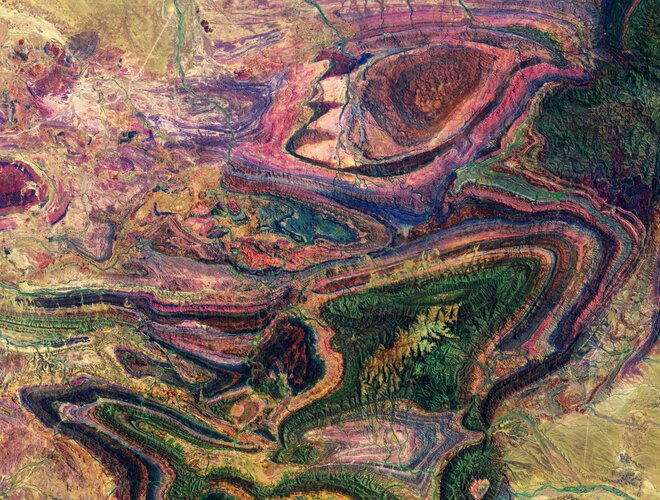 Image: The many colourful curves and folds of the Flinders Ranges in South Australia are featured in this false-colour image captured by the Copernicus Sentinel-2 mission.

The many colourful curves and folds of the Flinders Ranges – the largest mountain range in South Australia – are featured in this false-colour image captured by the Copernicus Sentinel-2 mission.

The Flinders mountains are a classic example of a folded mountain range, which are formed when two or more of Earth’s tectonic plates collide – folding and pushing layers of land into mountain ranges.

The formation of the Flinders Range began to form around 800 million years ago, when an ancient sea deposited sediments into the Adelaide Geosyncline basin. Millions of years later, the sediments were folded into mountains, which have since eroded. However, the folded rocks remained and were uplifted to create the landscape as we see it today.

The Flinders Ranges stretches for over 400 km across the Australian outback – from Port Pirie to Lake Callabonna. The first humans to inhabit the Flinders Ranges were the Adnyamathanha people, who have inhabited the range for tens of thousands of years.

The area pictured here shows the Vulkathunha-Gammon Ranges National Park in the Northern Flinders Ranges. The rugged park’s main attractions include deep gorges, chasms and an impressive wilderness. Numerous creeks appear like veins across the entire image, while the straight, white lines visible in the bottom right are dirt roads.

Slightly west of the image pictured here lies the Ediacara Hills, where some of the oldest fossil evidence of animal life was discovered.

The flora of the Flinders Ranges are largely species who have adapted to a semi-arid environment, including sugar gum tree, cypress-pine and mallee. Since the eradication of dingoes in the area, the number of red kangaroos, western grey kangaroos and wallaroos in the mountains has increased.

This image, also featured on the Earth from Space video programme, was captured on 31 December 2019 by the Copernicus Sentinel-2 mission – a two-satellite mission to supply the coverage and data delivery needed for Europe’s Copernicus programme. The image was processed by selecting spectral bands that can be used for classifying geological features.