Aaron Lojewski, who leads aurora sightseeing tours in Alaska, was lucky enough to photograph a "eruption" of brilliant pink light in the night skies one night in February. The same perturbations of the Earth's magnetic field that lit up the sky for Lojewski's camera were also captured by seismometers on the ground, a team of researchers reports in the journal Seismological Research Letters

Aaron Lojewski, who leads aurora sightseeing tours in Alaska, was lucky enough to photograph a "eruption" of brilliant pink light in the night skies one night in February.

The same perturbations of the Earth's magnetic field that lit up the sky for Lojewski's camera were also captured by seismometers on the ground, a team of researchers reports in the journal Seismological Research Letters.

By comparing data collected by all-sky cameras, magnetometers, and seismometers during three aurora events in 2019, University of Alaska Fairbanks seismologist Carl Tape and colleagues show that it's possible to match the striking display of lights with seismic signals, to observe the same phenomenon in different ways.

Researchers have known for a while that seismometers are sensitive to magnetic fluctuations - and have worked hard to find ways to shield their instruments against magnetic influence or to remove these unwanted signals from their seismic data. But the aurora study offers an example of how seismometers could be paired with other instruments to study these fluctuations.

"It can be hard to be definitive that these seismometer recordings are originating from the same influence as what's going on 120 kilometers up in the sky," Tape said. "It helps to have a simultaneous view of the sky, to given you more confidence about what you're seeing from the signals at ground level."

The aurora borealis, or northern lights, occurs when solar winds - plasma ejected from the Sun's surface - meet the protective magnetic field that surrounds the Earth. The collision of particles produces colorful lights in the sky and creates fluctuations in the magnetic field that are sometimes called solar or space "storms."

Magnetometers deployed on the Earth's surface are the primary instrument used to detect these fluctuations, which can significantly impact electrical grids, GPS systems and other crucial infrastructure. The aurora is commonly visible in wintertime in high-latitude regions such as Alaska.

These temporary seismic stations are not shielded from magnetic fields, unlike more permanent stations that are often cloaked in mu-metal, a nickel-iron alloy that directs magnetic fields around the instrument's sensors. As a result, "I was blown away by how well you can record magnetic storms across the array," said U.S. Geological Survey seismologist Adam Ringler, a co-author on the SRL paper.

Last month, Ringler and his colleagues published a paper demonstrating how the array's 200-plus seismometers in Alaska can be used to record space weather, potentially augmenting the 13 magnetometers in operation in the state.

Along with the all-sky camera data, seismic array data can help make sense of the strong variations in the magnetic field that occur in a magnetic east-west direction, adding a second dimension to typical north-south directional studies of the aurora and other magnetic storms, Tape and colleagues suggest.

The researchers noted in their paper that the link between the aurora borealis and magnetic perturbations was first discovered in Sweden in 1741, and that a seismometer in Germany detected an atmosphere-generated magnetic event for the first time during a strong solar storm in 1994.

"People have been making these connections for 250 years," Tape said. "This shows that we can still make discoveries, in this case with seismometers, to understand the aurora." 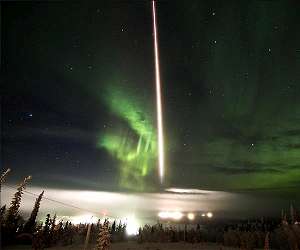 A journey into the northern lights
Solna, Sweden (SPX) Apr 10, 2020
Late February, close to midnight, a blast successfully sent off the one-stage rocket experiment Spider-2 from Esrange Space Center in northern Sweden. All previous attempts had been cancelled due to combinations of poor weather conditions, moonlight disturbing the optical instruments and most of all, the absence of Aurora Borealis, the central figure of the mission. Finally, the conditions were just perfect. Named by Galileo Galilei in 1619, Aurora Borealis or northern lights has long fascinated m ... read more