A plunge in incoming sunlight may have triggered 'snowball earths'

At least twice in Earth's history, nearly the entire planet was encased in a sheet of snow and ice. These dramatic "Snowball Earth" events occurred in quick succession, somewhere around 700 million years ago, and evidence suggests that the consecutive global ice ages set the stage for the subsequent explosion of complex, multicellular life on Earth. Scientists have considered multiple scen

At least twice in Earth's history, nearly the entire planet was encased in a sheet of snow and ice. These dramatic "Snowball Earth" events occurred in quick succession, somewhere around 700 million years ago, and evidence suggests that the consecutive global ice ages set the stage for the subsequent explosion of complex, multicellular life on Earth.

Scientists have considered multiple scenarios for what may have tipped the planet into each ice age. While no single driving process has been identified, it's assumed that whatever triggered the temporary freeze-overs must have done so in a way that pushed the planet past a critical threshold, such as reducing incoming sunlight or atmospheric carbon dioxide to levels low enough to set off a global expansion of ice.

But MIT scientists now say that Snowball Earths were likely the product of "rate-induced glaciations." That is, they found the Earth can be tipped into a global ice age when the level of solar radiation it receives changes quickly over a geologically short period of time. The amount of solar radiation doesn't have to drop to a particular threshold point; as long as the decrease in incoming sunlight occurs faster than a critical rate, a temporary glaciation, or Snowball Earth, will follow.

These findings, published in the Proceedings of the Royal Society A, suggest that whatever triggered the Earth's ice ages most likely involved processes that quickly reduced the amount of solar radiation coming to the surface, such as widespread volcanic eruptions or biologically induced cloud formation that could have significantly blocked out the sun's rays.

The findings may also apply to the search for life on other planets. Researchers have been keen on finding exoplanets within the habitable zone - a distance from their star that would be within a temperature range that could support life.

The new study suggests that these planets, like Earth, could also ice over temporarily if their climate changes abruptly. Even if they lie within a habitable zone, Earth-like planets may be more susceptible to global ice ages than previously thought.

"You could have a planet that stays well within the classical habitable zone, but if incoming sunlight changes too fast, you could get a Snowball Earth," says lead author Constantin Arnscheidt, a graduate student in MIT's Department of Earth, Atmospheric and Planetary Sciences (EAPS). "What this highlights is the notion that there's so much more nuance in the concept of habitability."

Arnscheidt has co-authored the paper with Daniel Rothman, EAPS professor of geophysics, and co-founder and co-director of the Lorenz Center.

A runaway snowball
Regardless of the particular processes that triggered past glaciations, scientists generally agree that Snowball Earths arose from a "runaway" effect involving an ice-albedo feedback: As incoming sunlight is reduced, ice expands from the poles to the equator.

As more ice covers the globe, the planet becomes more reflective, or higher in albedo, which further cools the surface for more ice to expand. Eventually, if the ice reaches a certain extent, this becomes a runaway process, resulting in a global glaciation.

Global ice ages on Earth are temporary in nature, due to the planet's carbon cycle. When the planet is not covered in ice, levels of carbon dioxide in the atmosphere are somewhat controlled by the weathering of rocks and minerals.

When the planet is covered in ice, weathering is vastly reduced, so that carbon dioxide builds up in the atmosphere, creating a greenhouse effect that eventually thaws the planet out of its ice age.

Scientists generally agree that the formation of Snowball Earths has something to do with the balance between incoming sunlight, the ice-albedo feedback, and the global carbon cycle.

"There are lots of ideas for what caused these global glaciations, but they all really boil down to some implicit modification of solar radiation coming in," Arnscheidt says. "But generally it's been studied in the context of crossing a threshold."

He and Rothman had previously studied other periods in Earth's history where the speed, or rate at which certain changes in climate occurred had a role in triggering events, such as past mass extinctions.

"In the course of this exercise, we realized there was an immediate way to make a serious point by applying such ideas of rate-induced tipping, to Snowball Earth and habitability," Rothman says.

"Be wary of speed"
The researchers developed a simple mathematical model of the Earth's climate system that includes equations to represent relations between incoming and outgoing solar radiation, the surface temperature of the Earth, the concentration of carbon dioxide in the atmosphere, and the effects of weathering in taking up and storing atmospheric carbon dioxide. The researchers were able to tune each of these parameters to observe which conditions generated a Snowball Earth.

Ultimately, they found that a planet was more likely to freeze over if incoming solar radiation decreased quickly, at a rate that was faster than a critical rate, rather than to a critical threshold, or particular level of sunlight.

There is some uncertainty in exactly what that critical rate would be, as the model is a simplified representation of the Earth's climate. Nevertheless, Arnscheidt estimates that the Earth would have to experience about a 2 percent drop in incoming sunlight over a period of about 10,000 years to tip into a global ice age.

"It's reasonable to assume past glaciations were induced by geologically quick changes to solar radiation," Arnscheidt says.

The particular mechanisms that may have quickly darkened the skies over tens of thousands of years is still up for debate. One possibility is that widespread volcanoes may have spewed aerosols into the atmosphere, blocking incoming sunlight around the world.

Another is that primitive algae may have evolved mechanisms that facilitated the formation of light-reflecting clouds. The results from this new study suggest scientists may consider processes such as these, that quickly reduce incoming solar radiation, as more likely triggers for Earth's ice ages.

"Even though humanity will not trigger a snowball glaciation on our current climate trajectory, the existence of such a 'rate-induced tipping point' at the global scale may still remain a cause for concern," Arnscheidt points out.

"For example, it teaches us that we should be wary of the speed at which we are modifying Earth's climate, not just the magnitude of the change. There could be other such rate-induced tipping points that might be triggered by anthropogenic warming. Identifying these and constraining their critical rates is a worthwhile goal for further research." 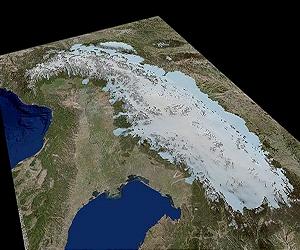 First comprehensive documentation of glacial retreat in the alps
Nuremberg, Germany (SPX) Jul 13, 2020
A research team from Friedrich-Alexander-Universitat Erlangen-Nurnberg (FAU) conducted the first study of area and elevation changes for all Alpine glaciers over a period of 14 years. This involved comparing three-dimensional terrain models obtained from the German radar satellite mission TanDEM-X and the German-US Shuttle Radar Topography Mission (SRTM) between 2000 and 2014. The team combined the elevation models with optical images from NASA's Landsat satellites. They found that the Alps have l ... read more