Aerojet Rocketdyne is playing a critical role in NASA's latest mission to the red planet. NASA's Mars 2020 mission with the Perseverance Rover is slated to launch on a United Launch Alliance (ULA) Atlas V rocket from Florida's Cape Canaveral Air Force Station on July 30. Designed to better understand the geology of Mars and seek signs of ancient life, Perseverance will ultimately make discoverie

Aerojet Rocketdyne is playing a critical role in NASA's latest mission to the red planet. NASA's Mars 2020 mission with the Perseverance Rover is slated to launch on a United Launch Alliance (ULA) Atlas V rocket from Florida's Cape Canaveral Air Force Station on July 30. Designed to better understand the geology of Mars and seek signs of ancient life, Perseverance will ultimately make discoveries to pave the way for human exploration of Mars.

"Aerojet Rocketdyne engines have flown aboard and enabled every successful NASA Mars mission to date and we're confident that Perseverance will soon join its predecessors in making amazing discoveries."

Perseverance will launch aboard a ULA Atlas V rocket in the 541 configuration, employing a number of Aerojet Rocketdyne motors, engines and tanks:

+ Four AJ-60A solid rocket motors manufactured in Sacramento, California, are on the Atlas V's first stage and will provide 1,394,000 pounds of thrust to lift the vehicle off the launch pad.

+ 12 MR-106 reaction control system thrusters made in Redmond, Washington, will provide pitch, yaw and roll control for the Atlas V's Centaur upper stage, as well as settling burns for the RL10 engine.

After the spacecraft separates from the Centaur upper stage, it will begin its roughly seven-month journey to Mars. Aerojet Rocketdyne propulsion is also employed on Perseverance's spacecraft, aiding the entry, descent and landing phases of the mission.

Eight MR-107U thrusters will stabilize the spacecraft during its entry into Martian atmosphere, and eight MR-80B throttling descent thrusters on the descent stage will power the sky crane as it lowers the rover onto the surface and then fly the stage a safe distance away. These in-space thrusters are also produced at the company's facility in Redmond, Washington.

Once the Perseverance rover is safely on the surface of Mars, it will begin preparations for its roughly two-year sample collection mission. Aerojet Rocketdyne provides the Multi-Mission Radioisotope Thermoelectric Generator (MMRTG) that will provide power to the rover and its various instruments throughout surface operations. The MMRTG is built at Aerojet Rocketdyne's facility in Los Angeles, California. 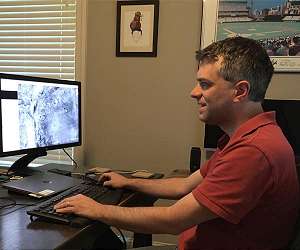 Meet Marshall's Caleb Fassett, NASA Scientist Who Discovered Next Mars Rover Landing Site
Huntsville AL (SPX) Jul 24, 2020
Imagine fulfilling your life's ambition to explore a previously uncharted dried lakebed and the prehistoric river deltas that once emptied into it, carrying clay and other rich alluvial debris - and perhaps even the fossilized remains of ancient bio-organisms - that could help illustrate its long history. Now imagine doing it roughly 40-50 million miles from home, in a windswept crater on Mars. For Caleb Fassett, a planetary scientist at NASA's Marshall Space Flight Center in Huntsville, Ala ... read more