After years of design tweaks and dozens of flight tests, engineers are confident the Ingenuity helicopter is ready to make history with the first flight by a powered aircraft on another planet. The mission is scheduled to launch from Florida on Thursday. If all goes as planned, the Mars helicopter will lift off from the Martian surface next April. But even if Ingenuity never makes it of

After years of design tweaks and dozens of flight tests, engineers are confident the Ingenuity helicopter is ready to make history with the first flight by a powered aircraft on another planet.

The mission is scheduled to launch from Florida on Thursday. If all goes as planned, the Mars helicopter will lift off from the Martian surface next April. But even if Ingenuity never makes it off the ground, the project won't be in vain, engineers said.

"Mars helicopter is a technology demonstration mission. It's a different type of mission because we're trying to prove that you can do something for the first time, so it's a different kind of mindset," Teddy Tzanetos, test conductor for the helicopter, told UPI.

"Getting to Mars and doing a system check, that will be a victory. Separating from the rover, that's another victory. Every one of these milestones will be a reason to celebrate," Tzanetos said.

The helicopter is perhaps the most anticipated part of this mission.

"The thing that has me the most excited ... is getting ready to watch a helicopter fly on another world," Jim Bridenstine, the NASA administrator, said during a news conference last month.

A time existed when decision makers at NASA were less enthusiastic.

"At the beginning, there were a lot people questioning whether this was even possible," Tzanetos said.

Ingenuity began 15 years ago as a loosely formed idea inside the head of Bob Balaram, a robotics technologist at NASA's Jet Propulsion Laboratory in Pasadena, Calif.

In the late 1990s, Balaram attended a presentation by Stanford professor Ilan Kroo, during which Kroo described his "mesicopter" prototype. It was a tiny airborne vehicle that would study various Earth systems. Balaram decided a helicopter might have a chance of working on Mars.

Balaram's idea received positive feedback, and while it wasn't selected for funding, decision makers did green-light a blade-rotor test for the helicopter. However, the test was a dead end, and the concept remained in limbo for more than a decade.

The idea again started to gain momentum in 2014, when engineers were able to demonstrate lift in a Martian-like atmosphere inside a large test chamber -- the first of several tests that got the project moving.

"We performed most of our tests in a large vacuum chamber called the 25-foot Space Simulator at NASA's Jet Propulsion Laboratory," Havard Grip, who led the development of helicopter's flight control system, told UPI.

"In this facility, we were able to evacuate the air and then backfill with enough carbon dioxide to get the same atmospheric density as on Mars," said Grip, a research technologist at the laboratory.

Because air near the surface of Mars is 100 times thinner than Earth's lower atmosphere, getting airborne on the Red Planet is far tougher. The engineers said it is equivalent to flying 100,000 feet above Earth -- three times higher than the average altitude of a commercial jetliner.

To meet the challenge, engineers made Ingenuity small and light. The helicopter is just 2 feet high and weighs less than 4 pounds.

To fly, the drone-like craft uses two sets of rotor blades, each spanning about 4 feet. The rotors will spin in opposite directions at speeds upward of 2,800 rotations per minute -- 10 times faster than the blades on an average traffic helicopter.

After engineers showed that lift was possible, they had to build a model to scale. Early models were remotely controlled and externally powered.

Eventually, the team made Ingenuity entirely self-sustained -- powered by onboard batteries and capable of taking off, flying and landing by using a combination of sensors and sophisticated flight control algorithms.

Much of the process involved heavy use of computer simulations, the engineers said.

"Because building and testing a helicopter for Mars is quite involved, we did a lot of modeling, analysis and simulation to lay the groundwork for the design before building prototypes and performing tests," Grip said.

"Many of the tests were designed to verify and refine the models that we had developed, so that we could fine-tune the flight control algorithms," he said.

Ingenuity's name is a nod to the novel nature of its mission, but the helicopter probably wouldn't be possible without a handful of well-established technologies and design techniques -- like off-the-shelf lithium-ion batteries and a cellphone-like camera.

"While the flight control system was developed from the ground up, many of the analysis techniques that we use are similar to what we apply on other missions," Grip said. "We also used a number of commercial off-the-shelf components, for example, in the sensors and avionics."

The Mars 2020 spacecraft and Perseverance rover are to begin their work right away, the helicopter will wait two months before use.

"We have a 30-day window in which we hope to perform up to five experimental test flights," Grip said.

Each test flight is to last no more than 90 seconds. The helicopter will travel at altitudes between 10 and 15 feet above the Martian surface, flying longer and longer distances on each successive flight. The final test flight could stretch up to 1,000 feet, engineers said.

"The focus of these flights is to validate the helicopter technology, so our main goal is to return engineering data for analysis," Grip said. "However, we also have cameras onboard and plan to return some images to Earth."

"We as humans evolved as creatures who could learn to adapt to any situation, no matter how harsh," Alexander wrote. "We are a species of explorers, and we will meet many setbacks on the way to Mars. However, we can persevere."

The name also describes the path of Ingenuity, from a hazy idea to a scrutinized and momentarily forgotten concept to a fully realized Martian helicopter.

Vaneeza Rupani, the Northport, Ala., high school junior who won NASA's essay contest to name the helicopter, recommended the helicopter be called Ingenuity for the same reason.

"The ingenuity and brilliance of people working hard to overcome the challenges of interplanetary travel are what allow us all to experience the wonders of space exploration," Vaneeza wrote in her essay.

"Ingenuity is what allows people to accomplish amazing things, and it allows us to expand our horizons to the edges of the universe." 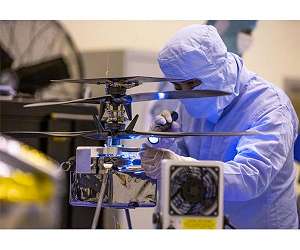 How NASA's Mars Helicopter Will Reach the Red Planet's Surface
Pasadena CA (JPL) Jun 24, 2020
NASA's Ingenuity Mars Helicopter will travel with the Perseverance rover through 314 million miles (505 million kilometers) of interplanetary space to get to Mars. But for the team working on the first experimental flight test on another planet, engineering the final 5 inches (13 centimeters) of the journey has been among the most challenging of all. To safely navigate those 5 inches - the distance Ingenuity will travel from where it's stowed on the rover to the surface of Mars - they came up with the i ... read more