Aerojet Rocketdyne recently completed all of its propulsion hardware for the first crewed flight of NASA's Space Launch System (SLS) rocket and Orion spacecraft. The engines and motors, which Aerojet Rocketdyne produces at its major space operations sites across the country, will support NASA's Artemis II mission. The Artemis II mission is the second flight of SLS and Orion and the first t

Aerojet Rocketdyne recently completed all of its propulsion hardware for the first crewed flight of NASA's Space Launch System (SLS) rocket and Orion spacecraft. The engines and motors, which Aerojet Rocketdyne produces at its major space operations sites across the country, will support NASA's Artemis II mission.

The Artemis II mission is the second flight of SLS and Orion and the first to send an astronaut crew to fly around the Moon.

"These are very exciting times for both NASA and the nation," said Eileen Drake, Aerojet Rocketdyne CEO and president. "The United States is sending humans beyond low Earth orbit for the first time in nearly 50 years, and we are traveling even farther with Artemis than we did with Apollo."

Four Aerojet Rocketdyne RS-25 engines collectively provide two million pounds of thrust to power the core stage of SLS, the world's most powerful rocket. The company completed upgrading the Artemis II RS-25 engines with advanced components and controllers in November 2019. Engine assembly and testing was completed at Aerojet Rocketdyne's facility at NASA's Stennis Space Center in Mississippi, and all four engines are ready for integration with the Artemis II core stage.

Aerojet Rocketdyne's RL10 engine powers the Interim Cryogenic Propulsion Stage (ICPS), or the second stage, of the SLS. This engine provides the power to accelerate the Orion spacecraft to speeds over 24,000 miles per hour and set it on a course for the Moon. Design, manufacture, assembly and test of the RL10 engine for the Artemis II mission took place at Aerojet Rocketdyne's West Palm Beach facility in Florida. The engine is ready for installation on the ICPS being manufactured by Boeing and United Launch Alliance in Decatur, Alabama.

Aerojet Rocketdyne provides a number of propulsion systems for the Lockheed Martin-built Orion crew module and the European Service Module that will be used on the Artemis II mission. The biggest of these is the jettison motor which generates 40,000 pounds of thrust for the Launch Abort System (LAS).

The jettison motor pulls the LAS off the crew module during both nominal operations and abort modes. Qualification testing was conducted at Redstone Arsenal in Huntsville, Alabama, and assembly of the Artemis II motor was completed in October 2019 at Aerojet Rocketdyne's facility in Orange, Virginia, and delivered to Lockheed Martin in February 2020.

Once in space, the Orion Main Engine (OME) on the service module will maneuver the spacecraft. Aerojet Rocketdyne is the original manufacturer of the OME, which was originally built and used for the space shuttle program. In March 2019, Aerojet Rocketdyne provided key valve and thermal components to NASA to complete the refurbishment of the Artemis II OME.

Also aboard Orion, Aerojet Rocketdyne is responsible for eight auxiliary engines on the service module and 12 reaction control thrusters on the crew module. The auxiliary engines, built in Redmond, Washington, each generate 110 pounds of thrust to provide position control while backing up the OME for required thrust. They were provided in March 2019 to Lockheed Martin for shipment to Europe for integration into the service module.

The reaction control system thrusters, also built in Redmond, each generating 160 pounds of thrust, will be used to control and properly orient the Orion crew module during its atmospheric reentry. Those thrusters were delivered in March 2020.

"The Artemis II mission will be the first time the Space Launch System and Orion will send astronauts into orbit around the Moon, and it is a key precursor to landing the first woman and the next man on the Moon," added Drake. "Aerojet Rocketdyne propulsion systems will play a critical role in making this endeavor a reality." 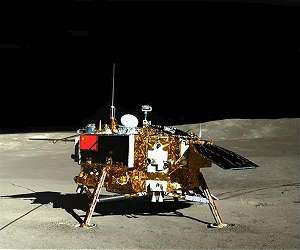 China's Chang'e 4 probe resumes work for 20th lunar day
Beijing (XNA) Jul 16, 2020
The lander and rover of the Chang'e 4 probe have resumed work for the 20th lunar day on the far side of the moon. The lander woke up at 5:48 am Wednesday (Beijing Time), and the rover awoke at 12:53 pm Tuesday. Both are in normal working order, according to the Lunar Exploration and Space Program Center of the China National Space Administration. The Chang'e 4 probe, launched on Dec 8, 2018, made the first-ever soft landing on the Von Karman Crater in the South Pole-Aitken Basin on the far s ... read more