A Mars landing mission must overcome a wide variety of difficulties and obstacles before it can fly through the Martian atmosphere and land on the planet's surface, experts said. The mission must have a heavy-lift carrier rocket such as China's Long March 5 or the United States' Atlas V that is powerful enough to transport a large, heavy probe to the Earth-Mars transfer trajectory, accordi

A Mars landing mission must overcome a wide variety of difficulties and obstacles before it can fly through the Martian atmosphere and land on the planet's surface, experts said.

The mission must have a heavy-lift carrier rocket such as China's Long March 5 or the United States' Atlas V that is powerful enough to transport a large, heavy probe to the Earth-Mars transfer trajectory, according to Pang Zhihao, a space activity researcher and author.

In addition, mission planners need to design a reliable itinerary for the spacecraft to travel toward the planet. They need to take many complicated factors into account, such as interference from other planets, solar wind and space radiation, he said, noting that even a tiny instance of thoughtlessness could lead to failure.

During the flight, the probe will need several midcourse correction operations to ensure it continues to head in the right direction toward Mars, a procedure that requires precise calculations.

Once the probe reaches Mars, the major challenges will just begin to appear. Due to the delay in signal transmission caused by the great distance between Earth and Mars, the probe must, to a certain extent, depend on itself in navigation, equipment control, malfunction detection and handling.

Besides, it must have good orbital maneuverability to ensure it will be captured by Mars' gravitational field, Pang said.

A high-performance deep-space communications network is also necessary to deal with the demanding tasks of sending and receiving signals between the control center and the probe, he added.

Wang Yanan, editor-in-chief of Aerospace Knowledge magazine, said that the entry, descent and landing processes of the spacecraft are the hardest and riskiest parts of the entire mission.

"These operations involve a succession of sophisticated maneuvers and require each and every step to be carefully and elaborately planned and accurately carried out," he said."The heatproof cover, parachute and retrorockets on the probe designed to decelerate the lander within a short time all must fulfill their tasks to guarantee the landing of the probe."

A successful landing is not the end of the mission. To accomplish the mission's assignments, the lander and the rover must sustain undisturbed power generation and remain in contact with ground control even amid unpredictable scenarios on the Martian surface such as the planet's frequent dust storms, he said. 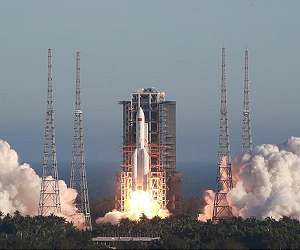 China launches Mars probe in space race with US
Wenchang, China (AFP) July 23, 2020
China launched a rover to Mars on Thursday, a journey coinciding with a similar US mission as the powers take their rivalry into deep space. The two countries are taking advantage of a period when Earth and Mars are favourably aligned for a short journey, with the US spacecraft due to lift off on July 30. The Chinese mission is named Tianwen-1 ("Questions to Heaven") - a nod to a classical poem that has verses about the cosmos. Engineers and other employees cheered at the launch site on the ... read more