One by one, an international team of astronomers is rediscovering "lost" worlds first spotted, but unconfirmed, by NASA's TESS telescope. One of those rediscovered worlds, described this week in the Astrophysical Journal Letters, is NGTS-11b, an exoplanet with the size and mass of Saturn but an orbit of just 35 days. NGTS-11b circles a star located 620 light-years away from Earth.

One by one, an international team of astronomers is rediscovering "lost" worlds first spotted, but unconfirmed, by NASA's TESS telescope.

One of those rediscovered worlds, described this week in the Astrophysical Journal Letters, is NGTS-11b, an exoplanet with the size and mass of Saturn but an orbit of just 35 days. NGTS-11b circles a star located 620 light-years away from Earth.

NASA's TESS telescope usually scans sections of the sky for 27 days. The observatory's images often capture transits, the dip in starlight that happens when an exoplanet orbits across the face of its host star.

But because many orbits take more than 27 days, TESS regularly captures just one transit. To confirm the presence of an exoplanet is a distant star system, and not an asteroid or some other anomaly, astronomers must observe a second transit.

Without a second transit, many of the exoplanet candidates initially spotted by TESS are effectively "lost," like an unstudied artifact collecting dust in a museum closet.

Scientists with the Next-Generation Transit Survey are using single-transits captured by TESS as a jumping off point for discovering potentially habitable exoplanets.

"By chasing that second transit down we've found a longer period planet. It's the first of hopefully many such finds pushing to longer periods," lead study author Samuel Gill said in a news release.

"These discoveries are rare but important, since they allow us to find longer period planets than other astronomers are finding. Longer period planets are cooler, more like the planets in our own solar system," said Gill, a researcher at the University of Warwick.

Planets with more intimate orbits around their host stars are typically too hot to support life, whereas exoplanets with longer orbital periods -- those spotted but unconfirmed by TESS -- are more likely to have life-supporting temperatures.

With average surface temperatures upwards of 160 degrees Celsius, NGTS-11b is still too hot to host liquid water and support life, but its not as intolerable as most exoplanets initially discovered by TESS.

"While we have discovered many planets that orbit close to their host star, we know of fewer at longer periods and cooler temperatures, which makes NGTS-11b an interesting find that takes us one step closer to finding planets in the Goldilocks zone," said study co-author Ed Gillen.

"Longer period planets like NGTS-11b may help us to better understand the various evolutionary processes that planetary systems undergo both during and after their formation," said Gillen, a researcher with the University of Cambridge's Cavendish Laboratory. 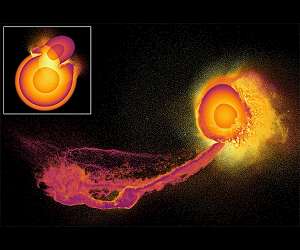 Supercomputer reveals atmospheric impact of gigantic planetary collisions
Durham UK (SPX) Jul 15, 2020
The giant impacts that dominate late stages of planet formation have a wide range of consequences for young planets and their atmospheres, according to new research. Research led by Durham University and involving the University of Glasgow, both UK, has developed a way of revealing the scale of atmosphere loss during planetary collisions based on 3D supercomputer simulations. The simulations show how Earth-like planets with thin atmospheres might have evolved in an early solar system dependi ... read more