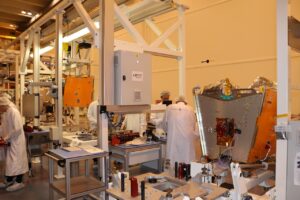 The U.S. Bankruptcy Court for the Southern District of New York approved the payment during a July 10 hearing that clears the way for the sale of OneWeb to the British government and Bharti Global, which bid together July 3 as BidCo 100 Ltd.

to acquire the bankrupt megaconstellation startup and return it to operations.

The court also approved BidCo 100’s plan to replace SoftBank and Grupo Elektra as OneWeb’s interim financial backer and provide up to $50.7 million in financing to allow work to resume at OneWeb Satellites, the joint venture Airbus and OneWeb created in 2016 to build hundreds and potentially thousands of satellites for the OneWeb constellation.

OneWeb told the court before the July 10 hearing that making pre-payments to OneWeb Satellites will allow the joint venture to “preserve its supply chain and resume constructing the satellites, as envisioned and required” under the terms of BidCo’s acquisition.

The number of satellites to be built was not specified. OneWeb Satellites spokesperson Molly Townsend said July 13 that the companies are still working out changes to a contract that originally covered 648 satellites. She declined to say how many satellites were built before OneWeb largely suspended its operations upon filing for bankruptcy.

As of January, OneWeb Satellites was producing two satellites per day at its Florida factory. In March, OneWeb launched 34 satellites, raising its on-orbit total to 74. Prior to filing for bankruptcy that month, OneWeb said it would pause its launch campaign until May, when it planned to put up another 30 or more satellites.

While the OneWeb Satellites factory was built expressly for the purpose of mass producing OneWeb satellites, it’s unclear the extent of manufacturing that will stay in Florida given the British government’s desire to see the U.K. play a more meaningful role in building the constellation.

“Longer term, we would want to look and see what we can do in terms of direct manufacturing,” Sharma said during a meeting of the U.K Parliament’s Business, Energy and Industrial Strategy Committee.

Sharma said the U.K. government is also considering how it could use OneWeb as a global satellite navigation system, or GNSS.

“There’s been debate around GNSS — and that wasn’t the rationale for this particular investment — but we are of course exploring how OneWeb may be able to contribute to [position, navigation and timing] resilience in the future,” he said.

The U.K. government continues to rely on the Galileo satellite navigation system its industry helped build. However, the U.K. has been exploring domestic alternatives since its decision to leave the European Union raised questions about assured access to Galileo’s military-grade encrypted signals.

Sharma said the U.K. government’s main reasons for investing in the company were commercial and strategic, with the commercial rationale being “the provision of broadband to people in remote areas,” as well as on planes and boats. He said OneWeb provides “strategic geopolitical opportunities for the U.K.” as Britain seeks to become “a world leader in the space sector.”