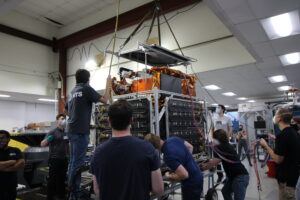 To receive FIRST UP Satcom, a weekly SpaceNews newsletter for satellite and telecom professionals, sign up here.

Viasat, still feeling the effects of the coronavirus pandemic, is selling $400 million in senior unsecured notes that would not be due until 2028.

Viasat intends to use the proceeds to repay debt and for general purposes the company said could include financing satellite orders, launches, potential acquisitions and other activities. An interest rate for the notes has not been set. Viasat said the coronavirus pandemic is continuing to impact its in-flight connectivity business, and that government sales are taking longer to execute as government customers adjust to working from home. [Viasat]

Astranis, a startup specializing in small geostationary satellites, has completed thermal vacuum testing for a practice satellite, paving the way for manufacturing to begin on its first MicroGEO satellite. Astranis said the thermal-vacuum testing on the qualification vehicle proved the technologies for its first satellite, designed for broadband in Alaska, are ready. Astranis conducted the test at an NTS Space facility in Los Angeles, California. Its first satellite is projected to start service in the summer of 2021 following a SpaceX launch. [Astranis/Techcrunch]

Satellite manufacturers will soon have a new test facility in which they can simulate the temperature and vacuum of space. The U.K.’s National Satellite Test Facility in Oxfordshire said June 17 it installed a 16-meter-long satellite test chamber, capable of testing satellites from shoebox-sized cubesats to minibus-sized geostationary satellites. The National Satellite Test Facility is scheduled to open in 2022.[UKRI]

Aerospace and defense company Leonardo has increased its stake in rocket builder Avio through a 14-million-euro share purchase. Leonardo now owns 29.63% of Avio, up 3.75%. Avio builds Europe’s Vega and upcoming Vega C rockets, and has a launch scheduled for June 18 carrying 53 smallsats. [Leonardo]

Intelsat announced Monday it has ordered six C-band satellites as part of its efforts to clear spectrum. The company ordered four satellites from Maxar and two from Northrop Grumman, with a seventh satellite still being competed. The satellites are for C-band services, mainly television broadcasting, that satellite operators will have to conduct with less C-band spectrum as the FCC clears spectrum to make way for more terrestrial 5G services. Intelsat, which filed for Chapter 11 bankruptcy protection in May, obtained court approval for $1 billion of debtor-in-possession financing June 10 to ensure it could move forward with vacating the spectrum on an accelerated timeline. Intelsat is the customer of the multi-satellite order Maxar disclosed in May. [SpaceNews]

SES, meanwhile, announced Tuesday that it has ordered four of a planned six C-band-clearing satellites from Boeing and Northrop Grumman. Boeing will use its all-electric 702SP satellite bus to build SES-20 and SES-21. Northrop Grumman will build SES-19 and SES-21 using its GeoStar-3 platform. All four satellites are slated to launch in the third quarter of 2022. SES expects to order two more C-band satellites in the coming days or weeks. [SpaceNews]

PlaneWave Instruments will build an optical ground station in Australia for laser communications with spacecraft in low and geosynchronous Earth orbits, as well as deep space. The ground station will be based at the Australian National University’s Mount Stromlo Observatory, and is expected to be completed in the first quarter of 2021. [Via Satellite]

Kratos will acquire a satellite antenna company that Communications & Power Industries (CPI) is divesting as part of a merger. Kratos will acquire ASC Signal for $35 million in cash from CPI in a deal announced Tuesday and expected to close within 60 days. CPI had to sell off ASC Signal as part of an agreement with the U.S. Department of Justice to allow CPI to acquire General Dynamics SATCOM Technologies while preserving competition for large satellite ground station antennas for geostationary satellites in the United States. [SpaceNews]