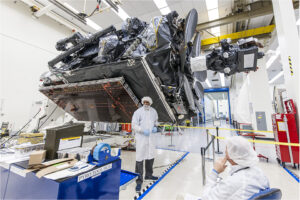 The satellites will provide replacement capacity so that SES can compress customers from 500 megahertz of C-band spectrum into 200 megahertz by Dec.

5, 2023. Luxembourg-based SES plans to order six satellites in total, with the remaining two satellite orders expected in the coming days or weeks.

SES said the four satellites ordered so far will launch in the third quarter of 2022, though the company did not disclose any launch providers. Northrop Grumman will build its two satellite orders, SES-18 and SES-19, in Dulles, Virginia, on its GeoStar-3 platform. Boeing will build the SES-20 and SES-21 satellites in Los Angeles, California, on all-electric 702SP platforms.

SES said the four satellites will only have C-band payloads, designed mainly to ensure more than 120 million homes can continue to receive television broadcasts after the FCC transfers satellite spectrum from 3.7-4.0 gigahertz to cellular 5G network operators.

SES, like Intelsat, is racing to clear 300 megahertz of spectrum by Dec. 5, 2023 in order to obtain billions of dollars in accelerated clearing payments for vacating the band two years ahead of the FCC’s deadline. SES will receive $3.97 billion and Intelsat $4.87 billion under an FCC plan that requires bidders in the agency’s Dec. 8 C-band spectrum auction to pay the satellite operators incentive payments in addition to reimbursing the cost of new C-band infrastructure.

“[O]ur focus is on delivering on our commitment and making the spectrum available in the shortest possible time while ensuring that we protect the broadcast customers and communities that we have built over 35 years,” SES chief executive Steve Collar said in a news release.

SES’s order announcement follows a day after Intelsat’s announcement that it ordered six satellites with replacement C-band capacity — four from Maxar Technologies and two from Northrop Grumman — and is in negotiations with manufacturers for a seventh satellite. Both companies estimate they will spend $1.6 billion on new C-band infrastructure, including satellites, launches and ground equipment, to continue service with less spectrum.