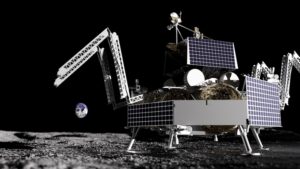 WASHINGTON — NASA has selected Astrobotic to deliver a rover to the surface of the moon in late 2023 to prospect for water ice that could support future human missions.

The task order is part of the Commercial Lunar Payload Services (CLPS) program, where NASA purchases services from companies for the delivery of payloads to the lunar surface, rather than buying landers themselves.

Astrobotic, who won one of the first CLPS awards a little more than a year ago for landing a set of payloads on the Moon using its Peregrine lander, will use its larger Griffin lander for VIPER, which weighs about 450 kilograms. The company, which will fly Peregrine on the first launch of United Launch Alliance’s Vulcan rocket in 2021, plans to select a launch provider for the VIPER mission later this year.

VIPER is designed to operate for at least 100 Earth days at the south polar region of the moon, looking for water ice deposits that may exist on or below the surface in permanently shadowed regions, which do not see direct sunlight and thus remain cold enough for ice. While previous missions, like the Lunar Crater Observation and Sensing Satellite in 2009, detected evidence of water ice at the poles, how much water ice there is, and in what form, remains unknown.

“The VIPER mission will search for ice, a resource that brings us a significant step closer to NASA’s ultimate goal of a sustainable long-term presence on the moon,” said Thomas Zurbuchen, NASA associate administrator for science, in a call with reporters about the selection of Astrobotic.

NASA announced its intent to fly VIPER last October, leveraging work that had been done on a previous lunar rover mission called Resource Prospector that the agency canceled in 2018. At that time, NASA expected to launch VIPER, which had an estimated cost of $250 million, in late 2022.

Agency officials said changes to the rover’s design to accommodate a 100-day mission, versus the 14-day lifetime of the Resource Prospector, pushed the mission’s launch back to late 2023. Lori Glaze, director of NASA’s planetary science division, said in the media call that the mission is still approaching confirmation, where the agency sets formal cost and schedule estimates, and did not give an updated cost estimate for the rover.

Landing at the south polar region of the moon will require high precision to place the lander down near a location that scientists believe may have water ice deposits. John Thornton, chief executive of Astrobotic, said it plans to demonstrate a landing precision of 100 meters on its first lander mission that will be used for the VIPER mission, and will make use of a hazard avoidance system as the lander approaches the surface.

VIPER is the fourth mission under NASA’s CLPS program. In May 2019 NASA issued the first two task orders to Astrobotic and Intuitive Machines, contracting with them to carry suites of experiments to the moon on landers scheduled for launch in 2021. The agency issued a task order to a third company, Orbit Beyond, but that company returned the task order two months later because internal business issues prevented it from proceeding.

NASA awarded a CLPS task order to Masten Space Systems April 8 to carry another set of experiments. This mission, like VIPER, will go to the south pole of the moon, with a launch scheduled for late 2022.

Steve Clarke, who recently left his position as deputy associate administrator for exploration in NASA’s Science Mission Directorate to be deputy associate administrator for aeronautics, declined to say how many of the 14 companies in the CLPS program bid on the VIPER task order. “We had a healthy response from the pool of our CLPS providers,” he said. However, some of the companies would have been unable to bid on VIPER since the rover is larger than their payload capacities.

VIPER is the second CLPS win for Astrobotic and also its second lander mission overall. “We are actively in the commercial market and, at this time, not announcing a launch in between” the Peregrine and Griffin missions, Thornton said, “but we certainly have a lot of commercial conversations going on right now.”

CLPS is intended to leverage any commercial interest in lunar landing missions by making NASA just one of potentially many customers for commercial landers. The agency has also shown a willingness to accept risk on early CLPS missions, with Zurbuchen espousing a “shots on goal” philosophy that accepts some amount of failures.

“I think the paradigm of taking shots on goal is really reflected in our entire plan,” he said in the call. “We all need to recognize that we’re taking more risks.”

Thornton, though, rejected the notion that this approach means only a “50-50” chance of a successful landing, particularly for a larger, more expensive mission like VIPER for which there is no spare. “Certainly, from a company perspective, a 50-50 risk profile is far too risky for us,” he said. “We are doing everything we possibly can to get that much, much, much higher.”