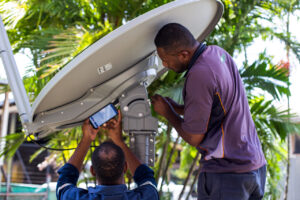 WASHINGTON — Three months after the coronavirus pandemic brought large swaths of the global economy to a near halt, Asia-Pacific satellite operators say they are still trying to identify a new normal.

The most immediate impact for communications satellite operators has been a potentially long downturn in air and maritime transportation that’s resulted in a drop in broadband demand from those sectors.

Other impacts from a global pandemic that’s decimated some businesses while sparing others are less obvious, however.

“There are opposing forces on the market that we observe,” Christian Patouraux, chief executive of Kacific, said during a June 2 webinar hosted by the Asia-Pacific Satellite Communications Council.

Demand for broadband internet is “through the roof” as people work from home and spend free time indoors, he said. But some Kacific customers, such as those whose income is dependent on the Asia-Pacific’s tourism industry, are struggling to pay bills, he said.

“They have cash problems, they don’t see the future as being very bright for the next year, the next two years — potentially more — depending on how deep this will affect the economy,” Patouraux said.

Kacific-1, the Singapore-based company’s first satellite, concentrates coverage on Asia-Pacific island nations and archipelagos including Indonesia, the Philippines and Vanuatu where the tourism industry is a major employer.

Nile Suwansiri, the chief commercial officer of Thailand-based Thaicom, said television viewership has surged during the pandemic, which would normally be a positive development, but many of Thaicom’s broadcast customers are “free-to-air,” meaning they are dependent on ads to support their channels.

“Viewing time is up, but the pool of advertising revenues have gone down significantly,” Suwansiri said.

“Our customers have seen an impact on lost revenues, which basically dominos to the satellite operator and to their ability to make payments,” Suwansiri said.

Broadband demand is up, he said, not only for entertainment but also remote education, a service Suwansiri said is likely to remain popular well after the pandemic.

Huang Baozhong, APT Satellite executive vice president, said that with the exception of maritime, aviation, and oil, most markets the Hong Kong-based company serves are continuing without difficulty. Some customers have asked to defer payments while stay-at-home orders and other restrictions put a damper on their earnings, he said.

“Most of our customers, they are still honoring their contracts, but only ask for some support,” he said. One customer Baozhong did not name is seeking to renegotiate a contract, an effort he said could result in a longer contract in exchange for lower pricing during the pandemic.

“All industries are affected by COVID, but I think we should be quite fortunate that we are in the infrastructure side of things,” he said. “I wouldn’t want to be in the automotive or tourism industry at the moment.”