Air Force says Space Development Agency should be in the Space Force now, not later 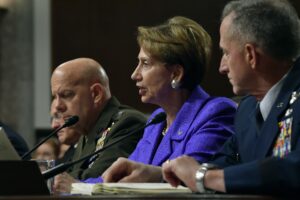 WASHINGTON — Air Force Secretary Barbara Barrett is pushing back on a Defense Department proposal that would delay transferring the Space Development Agency to the Space Force until October 2022.

In a May 6 memo to the Office of the Secretary of Defense, Barrett said the Space Development Agency — which is currently a Pentagon agency under the undersecretary of defense for research and engineering — should be part of the Space Force “as soon as possible.

As secretary of the Air Force, Barrett also serves as the top civilian leader of the Space Force. In the memo, a copy of which was obtained by SpaceNews, Barrett argues that DoD space programs and investments should be integrated under the Space Force sooner rather than later.

DoD created the SDA in March 2019 in response to criticism the U.S. military was not keeping up with the innovation happening in the space industry. The agency was given authorities to cut red tape and acquire commercially developed space technologies.

The Space Force was established in December 2019. At the time SDA was established it was not known if or when Congress would authorize the establishment of a Space Force. Then acting secretary of defense Patrick Shanahan said the SDA would transfer to the U.S. Space Force once the new service was approved by Congress.

Congress in the 2020 National Defense Authorization Act that created the Space Force said the SDA should move to the Space Force no later than October 1, 2022, but left it up to DoD and the Department of the Air Force to work out the details.

The timing of the transfer is now being contested.

A proposal drafted by DoD — which is being reviewed by the White House and has not yet been sent to congressional committees — asks Congress to set the transfer date in law as October 1, 2022.

“The SDA was created under the SecDef’s authority with a commitment to transfer the agency from OSD subsequent to the establishment of the Space Force,” Barrett added. The Air Force has maintained that the transfer “should occur in a conditions-based manner, as soon as practicable.”

Moving the SDA under the Space Force “would unify DoD’s space programs and address the fragmented acquisition authorities identified in several congressional studies,” Barrett wrote. “The Department of the Air Force is prepared to receive the SDA as soon as possible to deliver an integrated and synchronized space architecture for the Department.”

SDA moving ahead with projects

SDA is now in the process of selecting contractors to build a constellation of satellites in low Earth orbit to provide high-speed broadband and other services to the Defense Department.

SDA Director Derek Tournear currently reports to Undersecretary of Defense for Research and Engineering Mike Griffin. He said the agency expects to transition to the Space Force by October 2022 as Congress directed.

In recent public appearances, Tournear said SDA wants to able to complete its first constellation before transitioning to the Space Force in 2022. He also noted that SDA as a DoD agency supports all the military services and how that would continue under the Space Force has yet to be sorted out.