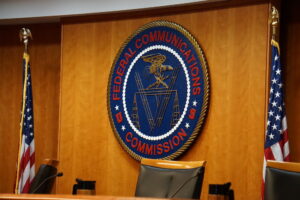 WASHINGTON — Three satellite operators whose fleets have at least some C-band coverage of the United States are taking the Federal Communications Commission to court over their exclusion from an upcoming spectrum auction that stands to transfer billions of dollars to competitors with larger shares of the market.

Bermuda-based ABS and Hispasat of Spain have teamed up with Argentine satellite operator Arsat, saying the C-band auction plan the FCC adopted earlier this year robs them of their spectrum rights.

The operators filed a complaint with the U.S. Court of Appeals for the District of Columbia on May 1, arguing that the FCC’s plan — formally issued as a “report and order” — to repurpose 300 megahertz of C-band for cellular 5G networks unfairly benefits their competitors.

“The Small Satellite Operators respectfully request that this Court reverse and hold unlawful, vacate, enjoin, annul, and set aside the Report and Order in its entirety, and provide such additional relief as may be just and proper,” the operators wrote.

The FCC voted Feb. 28 to proceed with an auction plan that covers spectrum relocation costs for Intelsat, SES, Eutelsat, Telesat and Embratel Star One. The FCC said those five operators demonstrated they have active C-band customers in the United States, making them eligible to receive a share of the $5.2 billion the FCC estimates it will cost the operators to vacate the auctioned spectrum without interrupting service.

The five operators can also collectively earn $9.7 billion in “accelerated clearing” payments by  moving C-band customers (typically broadcasters) out of the 300 megahertz swath of to-be-auctioned spectrum two years ahead of the 2025 deadline. All told, the C-band auction represents a $15 billion opportunity for these five operators, with Intelsat and SES — the world’s two largest commercial communications satellite operators — poised to reap the largest shares.

Embratel Star One, a Brazilian satellite operator with a small slice of the U.S. C-band market,was part of the Small Satellite Operators group now suing the FCC but broke ranks after the FCC included the company in its spectrum clearing programs.

Hispasat and ABS had tried to convince the FCC to include them as well, but were unsuccessful.

Hispasat told the FCC in February that it had an evangelical church as a U.S. customer with nine C-band dishes, but said that the customer never registered those dishes with the agency. The FCC said Feb. 28 that Hispasat’s customer claim amounted to “revisions to history” since the operator had not previously shown proof of providing regular C-band services in the  United States, but now claimed to have a customer dating back to 2017.

ABS Chief Executive James Frownfelter testified before the U.S. Congress in October that ABS was months away from starting U.S. service with its ABS-3A satellite when the FCC voted to repurpose 300 megahertz of C-band, reducing the marketability of the now  five-year-old satellite’s capacity.

“Our well-established competitors are allowed to sell their spectrum rights for billions of dollars — further entrenching their market dominance,” Frownfelter said.

The FCC countered in February that since ABS-3A is positioned over Africa, the satellite was not really designed with a focus on U.S. business. That ABS-3A had entered service in 2015 and still lacked U.S. customers further demonstrated U.S. C-band coverage was not a priority for the satellite, the FCC wrote.

“We reject ABS’s argument that uncertainty about the outcome of this proceeding resulted in its failure to commercialize any of its ABS-3A capacity, as we find this argument both unconvincing and irrelevant,” the FCC wrote.

Buenos Aires-based Arsat has full U.S. continental coverage with its ARSAT-2 satellite, but missed the FCC’s deadline last year to disclose U.S. C-band customers, according to the agency.

Arsat CEO Pablo Tognetti said the company’s failure to respond to the FCC’s C-band census last May was a decision Arsat made before he was appointed CEO in January.

“We do not agree with changing things [from] the way they are,” Tognetti said in a March interview, referring to U.S. C-band allocations.