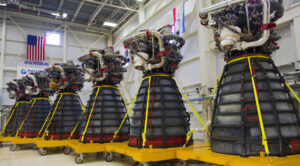 WASHINGTON — Despite sticker shock from some quarters, Aerojet Rocketdyne says a new contract for producing engines for NASA’s Space Launch System will result in cost reductions compared to the engines used on the space shuttle.

NASA announced May 1 it had awarded a contract to Aerojet valued at $1.79 billion to produce 18 RS-25 engines. Those engines will be produced for future flights of the SLS, which will use RS-25 engines originally built for the shuttle on its first four missions.

Many in space community noted that the contract implied a price of almost $100 million per engine. When including a 2015 contract to restart engine production and produce six engines, NASA is spending nearly $3.5 billion for 24 engines, or about $145 million per engine. Some contrasted that with documents that claimed a price of $40 million for a Space Shuttle Main Engine (SSME).

The economics of rocket engines are not that simple, Aerojet argues. “People want to do the simple math and attribute it all to the engine, and there’s really a lot more going on in this contract,” said Jim Maser, senior vice president of Aerojet Rocketdyne’s space business unit, in a May 5 interview.

Besides the fabrication and testing of individual engines, the contract also covers the use of special test equipment, overhead associated with technical and financial information that’s required for NASA human spaceflight projects and mission assurance. “There’s a fair amount of labor above and beyond just making parts,” he said.

Maser declined to give the cost of an individual engine alone, without the additional labor and overhead. “There’s a lot of other activity included in there that is well beyond just assembling and testing engines,” he said.

The $40 million cost estimate widely cited for the SSME does not have a date attached. If it comes from 2000, around the time the Block 2 SSME design was in production, that $40 million would be about $64 million in 2020 dollars, using NASA’s New Start Inflation Index. If it comes from 1980, just before the shuttle started operations, it would be nearly $150 million in 2020 dollars.

While not providing a specific cost for an RS-25, the contract includes an estimated 30% reduction in the cost per engine when compared to the SSME, which he said would be phased in over the course of the production contract. Those cost reductions come through application of additive manufacturing and reducing the number of parts in the engine, as well as using manufacturing practices from the company’s RS-68 engine developed for the Delta 4.

“The majority right now is new manufacturing methods and the new techniques,” he said of the cost reductions. “We’re not changing the fundamental design. We want to make sure that the engines run essentially the same but they’re more cost effective to build and have the same overall reliability.”

The company, though, is looking at ways for additional cost reductions. Maser said studies the company is doing with NASA are examining changes to the nozzle to replace the tubes within it to a “slotted channel” design, as well as using additive manufacturing to produce the powerhead portion of the engine. “Both of those changes, should we be able to move forward with them, would take the next 20% out, for a total of 50% reduction,” he said, and cut production time from four years to three.

The coronavirus pandemic has partially affected the company’s work on the RS-25. Maser said about 60–70% of Aerojet’s workforce is working from home, but the company has been able to bring in employees, with new safety protocols, to continue engine work, including a “certification” engine that is the first produced under the earlier contract. That engine will be ready for testing in early 2022.

Work, however, is halted on RS-25 engines at NASA’s Stennis Space Center in Mississippi, where the engines are tested, because the center had been closed since mid-March. Employees who would normally be working on engines at the center are instead doing other work or training, he said.