Air Force procurement chief: Three space launch providers ‘would be great if we had funding’ 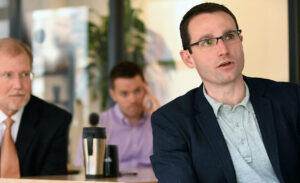 “In a perfect world, we absolutely would continue with more providers” but that is not financially possible, Roper told reporters April 29 during a video conference.

“The potential to go beyond that and have a third provider would be great if we had funding,” Roper said.

With four U.S. launch companies (United Launch Alliance, SpaceX, Blue Origin and Northrop Grumman) in contention for two contracts to be awarded this summer, critics have suggested that the Space and Missile Systems Center should try to keep more, not fewer, companies in the domestic space launch industry.

The market study done last year by the RAND Corp. backs the Air Force’s contention that it can only afford two providers but recommends that the Air Force hedge its bets in the near term and “provide tailored support to enable three U.S. launch service providers to continue in or enter the heavy lift launch market.”

Roper insisted that the upcoming National Security Space Launch Phase 2 procurement contracts will be awarded to only two companies. He said he agreed with RAND that there are risks in the program because companies are offering newly developed rockets. The terms of the Phase 2 procurement allow the Space and Missile Systems Center to use legacy launch vehicles if the new ones are not ready to start flying missions by 2022.

Roper agrees with that approach. “Continuing to have access to your legacy systems over the next three years is important,” he said.

If more money were available, he said, the Space and Missile Systems Center could consider starting NSSL Phase 3 sooner, which would help the two companies that don’t win Phase 2. According to current plans, Phase 3 would begin in 2025.

“I would love to continue research and development in launch and start Phase 3 R&D earlier,” said Roper. “It’s just merely a funding constraint for us.”

A decision to move up the Phase 3 schedule would have to be made collectively by the Defense Department and intelligence agencies that use the NSSL program to launch their satellites. “That sounds like a very good thing to discuss as a whole of government, the importance of having Phase 3 earlier,” said Roper. “And I imagine that the [RAND] report coming out will trigger that discussion.”

Roper said he agreed with RAND that if the United States supported three national security launch providers, it would boost U.S. global competitiveness because it would discourage foreign players from entering the market.

According to the RAND study, the selection of three launch service providers, rather than two, “might reduce the probability of additional foreign competitors — such as Japan or India — entering the commercial market.”